The sting operation is to be aired on Sunday but snippets of it have been posted online by a Qatar-based channel.

A Test match between India and Sri Lanka last year might have been played on a pitch doctored at the behest match-fixers, a sting operation has claimed, prompting the ICC to launch an investigation into the matter on Saturday.

The Al Jazeera television network claims that a well-known former Mumbai First-Class cricketer Robin Morris, who is now allegedly a match-fixer, admitted to his involvement in bribing a groundsman at Galle last year to alter the pitch.

The sting operation is to be aired on Sunday but snippets of it have been posted online by the Qatar-based channel.

Responding to the latest round of sensational allegations against the integrity of the much-maligned sport, the ICC said it is investigating.

We have already launched an investigation working with anti-corruption colleagues from Member countries based on the limited information we have received, ICC GM (Anti Corruption Unit) Alex Marshall said in a statement.

We have made repeated requests that all evidence and supporting materials relating to corruption in cricket is released immediately to enable us to undertake a full and comprehensive investigation, he added.

The match in question was the first Test between India and Sri Lanka at Galle from July 26-29.

The groundsman, Tharanga Indika, assistant manager at the Galle stadium, says he can make pitches to favour either bowlers or batsmen. If you want a pitch for spin bowling or pace bowling or batting, it can be done, the channel claimed on its website.

In the clipping, the 41-year-old Morris, who played 42 First-Class matches but never competed for India, gestures towards Indika, and says: What happens is he – we – can make a pitch to do whatever we want it to do.

Because he s the main curator. He is the assistant manager and curator of the Galle stadium, the website quotes Morris.

The track in that match was a belter on which India won by 304 runs. India scored 600 in the first innings with Shikhar Dhawan plundering 190 and Cheteshwar Pujara 153.

In the second innings, India managed 240 for three declared with skipper Virat Kohli scoring an unbeaten hundred. Sri Lanka could only muster 291 and 245 in their two innings and were beaten comprehensively within four days.

Indika allegedly claimed to the website that he prepared the pitch for the batsmen.

India was set for a batting wicket. We pressed the wicket thoroughly with a roller and then we put water on it to make it even harder, he has been quoted as saying in the video of the sting.

Morris, who had also played in the controversy-mired and now defunct Indian Cricket League (ICL), allegedly told the undercover reporter that he will provide him with leads to place bets.

In fact, the former India U-19 seamer-all-rounder also claimed that the next pitch fix will happen during England’s tour of Sri Lanka in November, this year at the same venue.

During last year, a reputed Indian channel claimed to have done a sting operation on former Maharashtra pacer and Pune curator Pandurang Salgaocar claiming that he had agreed to doctor the strip for a ODI against New Zealand.

However after ICC ACU s investigation, Salgaocar was absolved of any wrongdoing but was handed a token retrospective suspension for failing to report a corrupt approach. 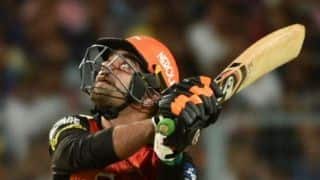