Player burn-out can be controlled: Gloster

Player burn-out can be controlled: Gloster

Former India physio John Gloster doesn't want to blame the Indian Premier League for India's poor show in the Test series in England and feels that it is for the players to decide whether to play in the Twenty20 league or not to keep themselves fit. 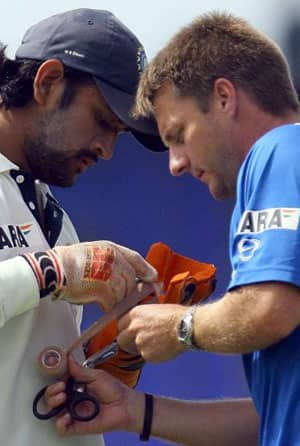 Former India physio John Gloster doesn’t want to blame the Indian Premier League for India’s poor show in the Test series in England and feels that it is for the players to decide whether to play in the Twenty20 league or not to keep themselves fit.

India’s inability to field a fully-fit side in ongoing series against England has been blamed for their loss in the first two Tests by huge margins, which has pushed them on the brink of losing their world number one ranking in Tests.

This has brought to the fore issues of fatigue and huge workload of the cricketers, which many feel have been contributed by the IPL.

However, Gloster said IPL is an important tournament and it is the prerogative of the players to decide if they want to play any particular event or not.

“Everybody has the right to not play if not fit. Whether it’s the IPL, World Cup or a Test match, the players have to prepare in the same vigor,” the Australian said.

“IPL is as important for Indian cricketers as any other tournament they play in because of the money involved. The support staffs also approach the IPL as they would to any other tournament. At the end of the day, the player must not lose focus,” he added.

Gloster, who worked with Team India from 2005 to 2008, feels that the player’s burn-out can be controlled by adhering to a proper schedule and proper monitoring.

“I think player burn-out has been talked about for quite sometime now and can definitely be controlled. In England’s County cricket structure, you’d play a four-day game from Wednesday to Saturday, a league game on Sunday, and use Monday to travel and train on Tuesday before the next game,” Gloster told Espnstar.com.

“This is the schedule for almost six months and a lot of players endorse these stints. Zaheer Khan and Sreesanth who’ve played a bit of County cricket would tell you that.

“The idea is to look at the schedule and monitor each and individual player’s workload so that they are not underdone and yet at the same not overdone. There is a fine balance,” he said.

Gloster, who is associated with the Rajasthan Royals team in IPL, feels the various commitments like charity events and endorsements in between games and tours could be a distraction for the cricketers and they should make sure it doesn’t interfere with their rehabilitation.

“That (endorsements) is a big issue, but at the end of the day, it’s a livelihood for the players. It’s a unique environment in India as compared to other cricket playing nations because of the pressure,” he said.

“Prioritising time with various activities could be a major issue at times but I am sure they don’t put financial commitments ahead of the game.

“I dare say it is a distraction perhaps, but if it did interfere with rehab and preparation they should do something about it or the BCCI should be in a position to interfere.

What’s important is the game and other things are secondary.” he added.

Fresh doubts over Zaheer's fitness ahead of Edgbaston Test