Dravid opined that there is no harm in having a bit of fun, but as individuals they need to lay down the rules for themselves.

In wake of the Hardik Pandya–KL Rahul controversy and ban on 16-year-old Mumbai cricketer for obscenity, former India international and India U-19 coach Rahul Dravid said that it is important to educate the youth, but there is no need to overreact. (ALSO READ: BCCI s CoA mulls behavioural counselling for Indian team after Hardik Pandya-KL Rahul controversy)

It is not that players did not make mistakes in the past. It is not that mistakes will not be made in the future despite our best efforts to educate the youth. But let us not overreact please, Dravid told Sportstar on Monday. (ALSO READ: Ban on Mumbai U-16 skipper for obscenity will act as deterrent for others: MCA)

The Committee of Administrators (CoA) is mulling a behavioural counselling programme for the Indian team in the wake of the furore over Rahul and Pandya s sexist comments on a show.

However, Dravid opined that there is no harm in having a bit of fun, but as individuals they need to lay down the rules for themselves.

It s important to switch off and relax off the field and it s a wrong notion that I didn t have fun (laughs). It s not that I ve not enjoyed myself. But when you represent your country and people recognise you, fortunately or unfortunately, there are responsibilities that come with that recognition. So you ve got to lay down the rules for yourself, Dravid told The Times of India on Tuesday.

The BCCI has suspended the Pandya and Rahul and their fate will be decided by an ombudsman, which will be appointed by the Supreme Court. The programme will also include all the age-group national teams and the A squads.

Incidentally, the board s treasurer Anirudh Chaudhry, in his observations after the Pandya-Rahul episode, had also suggested that young players undergo gender sensitivity programme so that they are well equipped to face the spotlight when they get into top flight.

But Dravid says such sessions have been part of the Indian setup, but stressed that the players need to remember their responsibilities as Indian cricketers.

Before the last two under-19 World Cups we did have lectures on various aspects. We brought in psychologists to speak to the players. We had workshops on building roles of responsibility. These lectures are also part of the NCA already.

“The best learning process happens in the dressing room from your seniors. But we should not overreact. People forget in the past also incidents have happened.

“Today it gets highlighted more but I agree we need to keep mentoring them, educating them because challenges today are different on and off the field. They have to remember their responsibilities as Indian cricketers. It can’t be everything was great earlier and everything is bad today, he added. 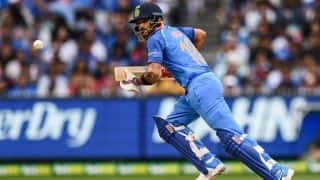