The spectre of corruption is back to haunt cricket with Al Jazeera's latest documentary on match-fixing.

The spectre of corruption is back to haunt cricket with Al Jazeera’s latest documentary on match-fixing. In its latest documentary, the broadcaster has alleged that four international matches involving Pakistan were spot-fixed. It further said that a small group of England players were part of ‘corruption at the highest levels of cricket.’

Pakistan captain Sarfraz Ahmed has praised the efforts taken by the Pakistan Cricket Board to educate players on corruption. He said it’s the players who have to show awareness and be more responsible to avoid getting involved in illegal activities.

The PCB (Pakistan Cricket Board) plays its part by organising anti-corruption lectures for us. Since 2006, I have been receiving lectures. With the Under-19 and Pakistan A teams, and since I joined the Pakistan team,” Sarfaraz told reporters on Tuesday. The players have to be responsible. They know what is right and what is wrong. Despite that, if they indulge in such activities, they are shooting themselves in the foot.

However, he also said that it’s not possible for a cricketer to know that the person who is clicking a picture with him is just a fan or a crook. In its documentary, Al Jazeera showed a picture of Pakistan wicketkeeper-batsman Umar Akmal checking a bag handed to him by an alleged facilitator. It is not a fault of a player if a stranger, who later turns out to be a crook, asks for a picture and he poses with him for it. If we don t pose for one, we are labelled as arrogant, he said.

To be honest, I don t take a lot of notice. Until Al Jazeera bring out anything concrete, where they name someone or show a piece of evidence, they keep saying there s this and that there, but never producing anyone or saying there s any evidence behind it. It s a bit like the boy who cried wolf, and until they say something I m not going to believe what they say, Wood was quoted as saying by The Telegraph. 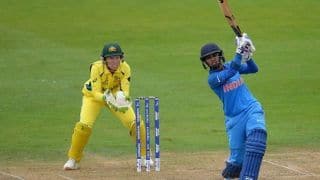