Playing for RCB is a lot different than playing for India, Virat Kohli will be a different beast at WC 201

Kohli's Royal Challengers Bangalore have failed to win seven out of the eight games so far this season and are all but out of reckoning for a playoff berth.

Part of New Zealand’s World Cup squad, tearaway quick Ferguson, who is in India playing for Kolkata Knight Riders in the IPL, said Kohli is an ‘international superstar’ and the Kiwis will be wary of him no matter what happens in the IPL.

“He is an international superstar. Playing for RCB is a lot different than playing for India,” Ferguson told IANS in an interview.

Kohli’s Royal Challengers Bangalore have failed to win seven out of the eight games so far this season and are all but out of reckoning for a playoff berth.

Kohli hasn’t been out of form, amassing 278 runs from eight matches at an average of 34.75. But by his lofty standards, the India captain has failed to live up to reputation.

Kohli’s captaincy has been questioned time and again with former players like Gautam Gambhir saying that Kohli is lucky to still remain at the helm of affairs at the franchise.

KKR take on RCB on Friday at the Eden Gardens here and more importantly Ferguson will also be looking to get Kohli’s back when New Zealand take on India in the World Cup on June 13 at Trent Bridge.

Ferguson said New Zealand will have to be cautious of Kohli like all teams when they lock horns at the World Cup as he is always a threat.

“He has been scoring runs and will still be a threat.”

The IPL can be excruciating for fast bowlers, and with Ferguson being a vital cog in New Zealand’s wheel for the World Cup, he was asked about workload management.

“For me personally, playing in games is often the best. So, from a physical point of view it’s not so tough but playing in the heat and things like that, travel takes a bit of a toll. But for me, getting game time will help in the World Cup.” (ALSO READ: Royal Challengers vs Indians, Talking Points: Magnificent Malinga and how the Negi gamble backfired for RCB)

Further elaborating on his point, Ferguson said bowling to the likes of Andre Russell and Chris Lynn helps one prepare better ahead of such an important meet.

“He (Russell) hits the ball well and it’s good training. I have been bowling to Lynn as well, tough guy to bowl to as he hits the ball long and hard. That experience, training with the best players under pressure will only put you in good stead going forward.”

Death bowling is a big challenge for pacers in the T20 format, but Ferguson feels while it isn’t easy, the challenge lies there. (ALSO READ: Royal Challengers Bangalore aren’t out of IPL yet: Yuzvendra Chahal)

“It’s tough but at the same time taking their wickets, getting them out at crucial times makes it that much more exciting.

“You take the good and bad with them. It’s tough for sure bowling at the death on small grounds with good wickets. But it’s the job we signed up for and if you can put damage control at those times, it means that you are chasing down less runs,” he concluded. 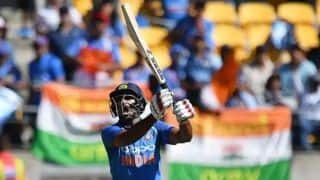 He is a very talented and exciting cricketer: England selectors give Jofra Archer chance to stake World Cup claim