Indian skipper Suresh Raina blamed his batsmen's poor shot selection and failure to build partnerships for the massive 103-run loss to the West Indies in the fourth one-dayer. 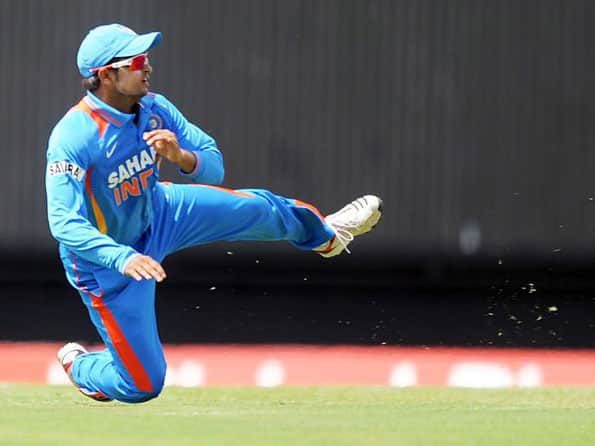 Indian skipper Suresh Raina blamed his batsmen’s poor shot selection and failure to build partnerships for the massive 103-run loss to the West Indies in the fourth one-dayer.

“Credit to the Windies for batting well. But we did not bat well at all, to be honest,” Raina said after the match on Monday.

“Our shot selection was wrong, we had no partnerships. Rohit (Sharma) was there but I and Yusuf (Pathan) got out at that time. There was no partnership. Batsmen have to be there when chasing a total like 240-245. And the West Indies played well in the batting powerplay,” he lamented.

Chasing 250, the Indians, who lead the five-match series 3-0, were all out for 146 to give the West Indies their first win.

“We decided to take on the leg-spinner (Anthony Martin) but we kept losing wickets,” said Raina.

India lost their final nine wickets for 105 runs to swiftly go down with 11 overs to spare. Martin benefitted the most, claiming the vital scalps of Virat Kohli and Suresh Raina in the middle overs.

“We needed at least two stands of 50-run each. We had a good start but the rest didn’t build on it,” Raina explained.

West Indies bowlers bowled a fair deal of short-pitched deliveries but India’s bowling coach Eric Simmons wasn’t ready to concede that it had softened up his batsmen.

“I don’t think short-pitched bowling is any issue with this team. It’s not as if we lost only because we were softened up (by them),” he said.

“Sometimes when a series is lost; there is not much to play for, a team is more relaxed and they tend to do well which is exactly what West Indies did.”

A contributing factor was India’s often poor bowling especially that of Ishant Sharma who went for 60 runs from his 10 overs.

“I wouldn’t say so. He’s been aggressive and has come after a very good IPL,” retorted Simmons.

“He has bowled in good areas, in right channels and bowled with a lot of focus in the nets,” he said.

Simmons also mentioned how the policy of this team has been to play to its strength, especially when it comes to bowling.

“We play with a plan which suits our bowlers. There is no point in trying to be someone else. We play to our strength; try to put pressure from both ends and develop a momentum for the side.”

Raina was asked some pointed questions on the continuing failure of Yusuf Pathan and Subramaniam Badrinath, as well as opener Shikhar Dhawan.

“We will see how the team combination works (in Jamaica). We have to play the first Test there also so we will try to play to our potential. The thing with batting is that you need to build partnership, you have to respect good line and length.”

Despite India’s loss, Raina’s captaincy so far has been very encouraging. First Coach Duncan Fletcher and now Simmons is very impressed with the way Raina rotated his bowlers and set up his field.

Raina said he has learnt a lot watching how Rahul Dravid and Mahendra Singh Dhoni go about their task as a captain.

“You watch them and learn how to be positive, how to play to your strength and how to cope with tough situations.”

Raina didn’t forget to praise the West Indies for the comeback they managed.

“One needs to give them credit. They played good cricket. It’s been a good comeback for them,” he said.