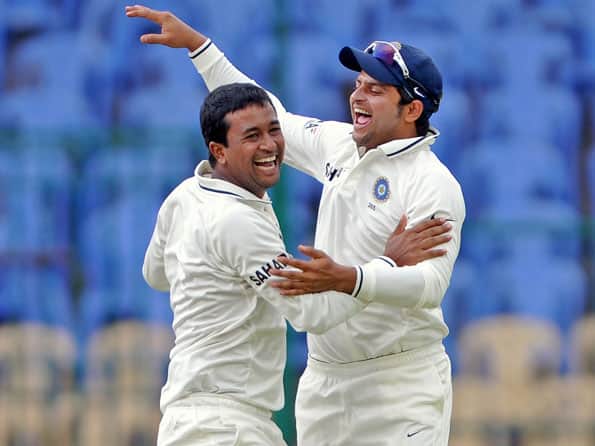 Pragyan Ojha registered his third five-wicket haul in Test cricket, in the second Test against New Zealand at Bangalore AFP

Ojha bagged five for 99 as New Zealand were bowled out for 365 on the second day of the Bangalore Test on Saturday morning.

“I would like to dedicate my 5 wickets to anna (vvs laxman) to a true legend and a great human being . You will always be very very special,” wrote Ojha on Twitter, after close of the play on day two.

Ojha, who opened the bowling for India after New Zealand elected to bat first on day one, claimed the key wickets of Martin Guptill, Ross Taylor and Kane Williamson.

This is Ojha’s third five-wicket haul in Test cricket, as his previous two five-for came against the West Indies in November-December 2011.

Ojha registered his first five-for in the opening Test at Feroz Shah Kotla, taking six for 72 in the first innings.

His second five-wicket haul came in the third Test of the same series, as he took six for 47 in the second innings.

Meanwhile at Bangalore, an unbeaten 104-run partnership between Virat Kohli and MS Dhoni has helped India reach a score of 283 runs at the close of day two, with the hosts now trailing New Zealand by 82 runs.

Kohli scored an unbeaten 93 runs while captain Dhoni scored an aggressive 46 as the partnership between the two helped resurrect the innings after the struggle by the top-oder.