England need a quick solution to their frailties against off-spinner Saeed Ajmal when they face Pakistan in the second Test at the Abu Dhabi Stadium starting on Wednesday. 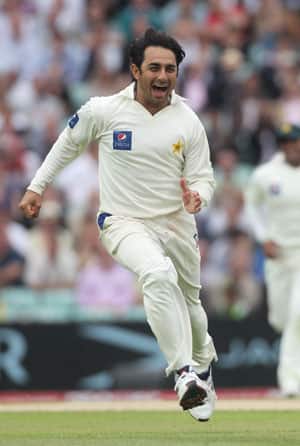 England need a quick solution to their frailties against off-spinner Saeed Ajmal when they face Pakistan in the second Test at the Abu Dhabi Stadium starting on Wednesday.

Andrew Strauss s men, who are in danger of losing their first Test series after being unbeaten in the last nine, were mauled by the 34-year-old spinner in the first match in Dubai, where they lost by 10 wickets inside three days.

Ajmal took a career-best 7-55 to demolish England for 192 in the first innings, before half-centuries from Mohammad Hafeez, Taufiq Umar, Adnan Akmal and Misbah-ul-Haq gave Pakistan a lead of 146.

Paceman Umar Gul, who took four early wickets, then combined with Ajmal and left-arm spinner Abdul Rehman to wreck England a second time for 160 before the openers knocked off the 15 runs needed to go one up in the three-Test series.

England can take solace from the fact that Abu Dhabi s pitch offers very slow turn and both the Tests played here ended in draws, the latest in October last year when Pakistan let off Sri Lanka by dropping seven second innings catches.

Despite the slowness of the pitch, Ajmal will again be a big threat but the England skipper was confident his players could stage a fightback.

“I don t think it is a huge challenge, there will be a huge feeling that we haven t given a good account of ourselves and that will be a good motivation for us to come back stronger,” said Strauss, whose England side last lost a Test series 2009, in the West Indies.

The double capitulation in Dubai prompted questions about the tourists approach to Ajmal, and Strauss admitted his batsmen had made mistakes against the spinner.

“I think couple of us contributed and allowed him to put even more pressure on the batsmen coming in the first innings. The ball wasn t turning a huge amount,” he said of the Dubai pitch where England s Graeme Swann managed 4-107.

England, currently the number one ranked side in the world, have not lost two Tests in a row since 2008 and Strauss said the team was determined to bounce back in Abu Dhabi.

Left-arm spinner Monty Panesar missed out in Dubai, and England look likely to go with the same combination in Abu Dhabi of three pacemen and lone spinner Swann.

Pakistan captain Misbah-ul-Haq played down a row around Ajmal s bowling action, triggered by former England paceman Bob Willis. Ajmal s action was reported in 2009 before it was cleared by the International Cricket Council (ICC).

“He is cleared by the ICC and he is now playing for almost four-five years in international cricket,” said Misbah, whose side are the “home” team in the series, which is being played in the United Arab Emirates over security fears in Pakistan.

“Everyone should just admit now that he is a very good bowler and has certain variations which he is bowling.”

Misbah said his team will be ready for England s backlash.

The third and final Test will be played in Dubai from February 3-7. The Tests will be followed by four one-day and three Twenty20 internationals. (AFP)