Prime Minister's XI will play an ODI match at the Manuka Oval, Canberra on October 31 against the touring South Africa side.

Australia s Prime Minister s XI coach Chris Rogers hopes he can be witness to another Glenn Maxwell show during their ODI match at the Manuka Oval, Canberra on October 31 against the touring South Africa side, the only warm-up match for the visitors before the one-day series.

Maxwell blasted his way to a 89-ball 136 against England in 2015 which according to Rogers, who was part of the playing XI, was one of the best innings he s ever seen. Australia however, fell short by 60 runs.

“I captained the PM’s side when England got a huge score against us, it was 350-plus and we were gone until Glenn Maxwell played one of the best innings I’ve ever seen,” Rogers was quoted as saying in a report in the Sydney Morning Herald on Monday.

“That did wonders for him and if someone stood up and did that again next week it would be incredible. Every game is an opportunity but to play against an international side that has such class throughout is a fantastic opportunity for all involved.

“If you do well it adds to your reputation and who knows where that can take you. Clearly, if someone scores a big total or gets a bag then it will help their cause.

Behrendorff, who has just played two T20Is, is determined to use the match to get back to national reckoning. “He works so hard and is one of those guys who kind of teaches himself to get better and better. He’s highly intelligent and I’m looking forward to seeing what he can do,” Rogers said.

“He has a point to prove, a year or two ago he was really on the fringe and injury has put him a little bit down the ladder but now he’s fit and firing who knows what he can do.”

Meanwhile, Rogers, who made his Test debut against India in 2008 when he was 30, said youngsters should not be burdened with expectations. “It’s a journey, of course players want to play for Australia as soon as they can, but it’s about understanding the game as well and knowing when times go wrong you’ve got something to fall back on,” he said.

“Every one of these opportunities is a learning opportunity and we re seeing lately when you get into that international environment it’s tough and if you don’t have the basics then you get found out. 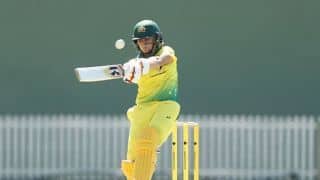