For Manjrekar, what stood out was Shaw s technical prowess which allowed him to score briskly without taking too many risks.

Former India opener turned television analyst Sanjay Manjrekar believes that Prithvi Shaw can have an impact on the Test team much like Virender Sehwag did, because of his back-foot game and appetite to score runs fast.

India are due to play four Tests in Australia, and the 18-year-old s debut series against West Indies, albeit on docile tracks, has prompted Manjrekar to earmark Shaw for success.

The real gain from the series was Shaw, Manjrekar wrote in his column for ESPNcricinfo. Granted, the pitches were Indian and the opposition attack not the greatest, but you can recognise a special talent when you see one. Shaw looks a player with batting experience beyond his age; he looks like an 18-year-old who has batted as much as the average 22-year-old cricketer has, whether it’s in the nets or in matches. He looks a seasoned batsman – very much like a certain 16-year-old I saw in 1989.

In his first Test innings, Shaw opened the batting at Rajkot and scored 134 off 154 balls, with 19 fours. In Hyderabad, he sped to 70 off 53 balls in the first innings and then got an unbeaten 33 off 45 balls as India won by ten wickets to seal the series 2-0.

For Manjrekar, what stood out was Shaw s technical prowess which allowed him to score briskly without taking too many risks.

Clearly he is an attacking, fast-scoring player, and impressively, he is not trying to bat that way; he is just reacting to balls with a clear mind with no premeditations. The runs and the boundaries come as a by-product of that, wrote Manjrekar.

Shaw is a good back-foot player, which augurs well for him overseas. And he plays the ball under his eyes. Balls pitched on off stump, swinging and drawing him forward, will test him. So will the short ball into his ribs, as he likes to stay beside the line of the ball. If he manages to work around these potential vulnerabilities, India will have a Virender Sehwag-like opener who will quickly transfer pressure onto the opposition. Like Sehwag, Shaw has the ability to be a big impact player in Tests. 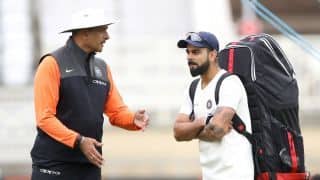