Cheteshwar Pujara hit a century while Rohit Sharma presented his case with a patient fifty as India reached 297/5 on Day 1.

Cheteshwar Pujara hit a century while Rohit Sharma presented his case for the upcoming two-Test series with a patient fifty as India reached 297/5 on Day 1 of their three-day tour match against West Indies A in Antigua.

Captaining the side in the place of Virat Kohli, Ajinkya Rahane opted to bat first at the Coolidge Ground on Saturday. Pujara struck 100 before being retired out while Rohit scored 68 before being dismissed after lunch.

India innings began on a shaky note with the openers and Rahane back in the dressing room inside the first 15 overs. Jonathan Carter (3/39) broke through the defenses of opener Mayank Agarwal to have him bowled on 12. Fellow opener KL Rahul got the start hitting five fours and a six before Keon Harding got rid of him on 36.

With India 53/3 in 14.5 overs, senior pros Pujara and Rohit got together to repair the early damage. Pujara’s innings featured eight fours and a six and he was retired out after scoring 100 off 187.

Rohit scored 68 off 115, also hitting eight fours and a six.

Rishabh Pant also got the start with four fours and a six in his 53-ball 33 but became Carter’s third victim after being adjudged lbw two deliveries before the bails were drawn.

Rain forced the play to end seven deliveries earlier. Hanuma Vihari was unbeaten on 37 and had allrounder Ravindra Jadeja (1*) for company at the end of the day’s play.

This is India’s lone practice match ahead of the two-Test series against West Indies which gets underway from August 22. 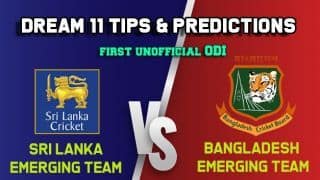