Pune is much better than what results show: Geoff Marsh

Pune is much better than what results show: Geoff Marsh

Inconsistent batting has let them down in their debut IPL season but Pune Warriors coach Geoff Marsh asserted that his side is a much better than what results show. 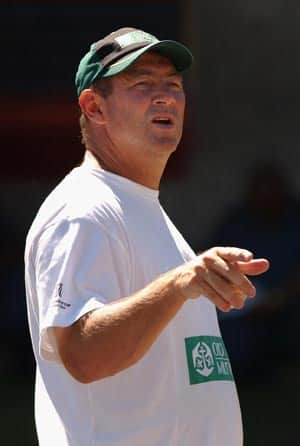 Marsh was unhappy with the team’s batting Getty Images

Inconsistent batting has let them down in their debut IPL season but Pune Warriors coach Geoff Marsh asserted that his side is much better than what results show.

Warriors succeeded in breaking the seven-match losing string on Sunday, when they pipped Kings XI Punjab by five wickets.

“We are definitely a better side. We felt there were times we didn’t execute (plans) well. This was our first year, we had a tough time. We had two good games to start with against Mumbai Indians and Chennai Super Kings,” Marsh said at the post-match news conference here.

Chasing 120 for victory after being asked to bowl first, Pune achieved the target for the loss of five wickets.

“It was a pleasing, good consistent performance today,” Marsh, whose two sons featured in today’s game with Shaun and Mitchell representing KXIP and Pune, respectively, said.

On former India captain Sourav Ganguly not playing today after having been recently roped in by the Pune team, Marsh said that he has been training and felt he was not ready.

“He will know when the right time is (for him to play).”

The Pune coach gave credit to their bowlers, whose brilliant performance set up the win for them.

“It was important for us to win. We felt that earlier we had three games, which we should have won,” he said.

Marsh was not happy with the batting department, saying he would have liked top order to finish the game.

He heaped praise on young leg spinner Rahul Sharma, who was declared as man-of-the-match today for removing Punjab’s openers and giving just 17 runs. He had also impressed in his previous match against Mumbai Indians.

“I think he is having a terrific tournament. Gilchrist worked on him when he was in the Deccan Chargers. Rahul is a dedicated cricketer. He loves the game,” he said.

“As long as he keeps working hard, he is pretty close,” he said about Rahul’s chances of breaking into the Indian side.

Marsh said that there were lot of positives for Pune, which like Kochi Tuskers Kerala made its debut in IPL this year and felt they were unlucky to have missed services of Angelo Matthews due to injury.

Asked how he felt as his elder son Shaun was playing for Kings XI Punjab and Mitchell featured as a bowler for Pune, Marsh said, “I felt Shaun was batting in good form and could have scored big. Mitchell also bowled well. In the end, I am happy because Pune won.”