Yuvraj Singh showed requisite patience before exploding as his sparkling unbeaten 96 scripted Punjab‘s six-wicket win over Delhi in the second north zone match of the Vijay Hazare Trophy on Saturday.

Chasing a target of 229, Yuvraj shouldered bulk of the responsibility on a track where batting became difficult due to overcast conditions.

Punjab chased down the target in exactly 47 overs as Yuvraj scored 96 off 95 balls with 10 fours and two sixes.

The conditions required the mentality of a grafter which Virender Sehwag lacked and as usual looked miserable in another failure while Yuvraj was ready to be patient initially before launching a swift counter attack.

A cover drive off Ashish Nehra, a flick and square cut off Rajat Bhatia were signature Yuvraj shots. The standout shot certainly was a pull off Nehra where he got on top of the ball and every blade of grass must have felt the punch in the stroke.

He also lofted Varun Sood over mid-wicket for a six.

Credit should also be given to Gurkeerat Singh (52) as he played the second fiddle to perfection during their partnership of 143 runs after joining hands at 89 for four.

Fittingly Yuvraj finished with a huge second six off Sood  to end the match. This is an innings that will give him lot of satisfaction before ICC World T20 2014.

Earlier, Mithun Manhas (98) again turned out to be Delhi’s saviour after overcast conditions and some disciplined bowling and fielding had the hosts in deep trouble.

Unmukt Chand (0) got a beauty from Siddharth Kaul first up. The ball pitched on the off-stump and moved a shade taking outside edge of Unmukt’s blade into Khera’s gloves.

Sehwag (16) got couple of eye-catching boundaries through off-side cordon but as has been the case with him, he quickly ran out of patience. He tried an expansive drive to an away going delivery from Kaul. The body didn’t move to the line of the ball and the edge was carried by Khera.

Gautam Gambhir (8) was watchful as both Sandeep and Kaul were moving the ball appreciably but a desperate second run saw him short of his crease as the throw from deep backward point was a good one.

Rajat (8) got an in-dipper from Sandeep that went through the gate while Harbhajan Singh trapped Milind Kumar for eight in his very first over as Delhi were reduced to 53 for five.

However Manhas typically started the rescue act along with Puneet Bisht. He didn’t play a lot of deliveries outside off-stump but anything on the up was driven. He added 74 runs for the sixth wicket.

Bisht was bowled by Kohli at 127 but Manhas found an able ally in Varun Sood (28) as they added 71 runs for the seventh wicket. Manhas in fact slog swept Harbhajan.

Sood was finally bowled by a quicker one from Harbhajan who took two for 54 in 12 overs (one bowler can bowl 12 overs in domestic one dayers).

Manhas was unlucky as his pull shot was caught at deep backward square leg. His 98 came off 115 balls with eight boundaries and a six and he had taken Delhi to a respectable score. 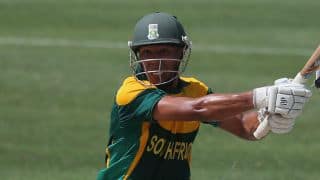