Wicketkeeper batsman Alex Carey made 53 off 56 while for India leg spinner Shreyas Gopal picked three for 50 in his ten overs.

Opener D Arcy Short hit 72 off 77 as Australia A set a target of 226 for India B in the final of the Quadrangular series at the M Chinnaswamy Stadium, Bengaluru on Wednesday.

Wicketkeeper batsman Alex Carey made 53 off 56 while for India leg spinner Shreyas Gopal picked three for 50 in his ten overs.

After being sent in to bat, Australia A had a good start with openers Short and Usman Khawaja combining for 51 runs in just 8.4 overs before the later was dismissed for 23 by off spinner Jalaj Saxena.

Travis Head, Australia A skipper, was removed for a three-bal duck by Delhi pacer Navdeep Saini. Spinners Saxena, Gopal and Deepak Hooda then stifled the run-scoring with two down batsman Marnus Labuschagne and Ashton Agar struggling to get gown.

Labuschagne made 17 off 40 deliveries before Gopal trapped him in front. Agar was caught and bowled by Hooda for 20 (32b).

But Carey grinded it out in the middle scoring a fifty before being Gopal second wicket of the day. Handy contributions from the lower order – Jack Wildermuth (10), Michael Neser (10) and Joel Paris (9) then pushed Australia A s target to 225 in 47.5 overs.

Pacer Siddharth Kaul returned two for 24 in his five while Saini recorded figures of 8.5-0-33-2.

Hooda s ten yielded two wickets at the expense of 41 runs while Saxena gave away 43 in his nine with one wicket to show. Karnataka pacer Prasidh Krishna was expensive giving away 23 runs in his two overs. 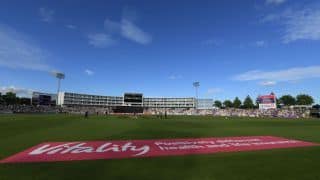