Quadrangular Series, India B vs Australia A: Jack Wildermuth carries Australia A over the line in a close game

Quadrangular Series, India B vs Australia A: Jack Wildermuth carries Australia A over the line in a close

Wildermuth came up with a scintillating 62*(42) and importantly knocked off 20 runs from the last over bowled by medium-pacer Prasidh Krishna to carry his team over the line against India B. Usman Khawaja scored a century and was MoM.

Usman Khawaja came up with a measured century, 101*(93) for Australia A against India B at KSCA ground located in Alur around 30 km north-west of the home of Karnataka cricket, M Chinnaswamy Stadium in Bengaluru. But the hero of the game turned out to be 24-year old Queensland all-rounder Jack Wildermuth. He came up with a scintillating 62*(42) and importantly knocked off 20 runs from the last over bowled by medium-pacer Prasidh Krishna to carry his team over the line against India B, who must have thought that the game was in their pockets till the penultimate over.

Wildermuth joined Khawaja in the middle with Australia A in some sort of trouble at 155/5 in 28.4 overs with another 83 runs required off 68 balls. Australia A were initially chasing a target of 277 which was revised later to 248 in 40 overs by D/L method, when play resumed after rain interrupted play when Australia A were 132/4 in 24.1 overs. It was seemingly easy by the modern standards but Australia A only had their four bowlers – Richardson, Stanlake, Swepson and Michael Neser to follow if one of these two got out any time soon. They did complete the job and helped their side to victory in the end by five wickets.

Australia A started well with the openers adding 77 runs in 13.1 overs before Alex Carey was cleaned up by Jalaj Saxena which led to another two wickets in relatively quick succession as captain Travis Head and Peter Handscomb for single-digit scores as Australia A found themselves at 95/3 in 19 overs.

Khawaja held one end up and added 29 and 31 with Labuschagne and Agar for the fourth and fifth wickets, respectively. In the end, Khawaja was ably assisted by Wildermuth to get the job done. Saxena took 2/48 and was the most successful bowler for India B in an otherwise insipid bowling performance.

In the other game of the Quadrangular, played at Chinnaswamy Stadium, South Africa A trumped India A by four wickets. A perusal of the points table below would indicate that whatever be the outcome of the last two league games now, Australia A and India B have qualified for the final to be played at Chinnaswamy on 29 August. 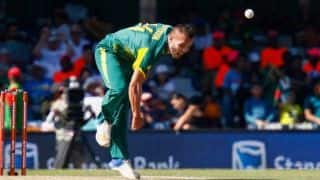