Lynn was Queensland's leading run-getter in the JLT Cup but has not earned a contract for 2019-20.

Chris Lynn has not been given a Queensland contract for the 2019-20 Australian domestic season, while in his place pace bower Alister McDermott has been handed one after three years.

Lynn, 29, finished last season’s JLT One-Day Cup as Queensland’s leading run-getter with 450 at 75.33 and yet has not been awarded a contract for the next year.

“Chris is very much in our thinking for our one-day set-up in light of his performances last summer and we will work closely with him in the lead-up to the season once again,” said Queensland coach Wade Seccombe on Wednesday.

McDermott, the son of former Australia fast bowler Craig, is the only new inclusion on Queensland’s full state contract list.

“Ali has worked exceptionally hard to get to this point and he brings that determination and composure to the squad,” said Seccombe. “We’re very pleased to have him resume with us after a few years away. He has used Premier Cricket and the 2nd XI competition to demonstrate his skills as well as challenging himself through taking on coaching duties with his club.

In September 2018, Bryant made headlines when he hit the quickest one-day half-century in Queensland s history. A self-confessed fan of David Warner, Bryant then earned selection in the Cricket Australia XI that played a T20 tour game against South Africa. He scored 36 off 22 balls in a 41-run loss.

This was followed by a successful BBL season with Brisbane Heat, in which Bryant scored 335 runs at at a strike-rate of 150.22.

In the Rookie contracted list, Under-19 batsman Corey Hunter and Brisbane Heat left-arm pace bowler Matthew Willians have been named. 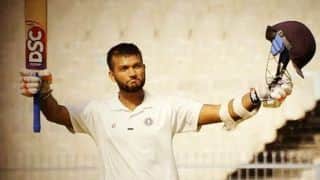 India A squad: What have I done so terribly wrong to deserve this? - tweets Jalaj Saxena after latest snub