India Women will now have to play for pride in the third T20I.

New Zealand Women thrash India Women by 6 wickets courtesy of a 34-ball 60 by Rachel Priest and win the series with one more match to go. Priest got to her fifty off just 22 deliveries. India made an ideal start to their defence of 136 as they got rid of opener Susie Bates for a duck off the second ball of the innings. The star from the previous T20I, Sophie Devine was also dismissed for 14 soon after and The White Ferns were reduced to 19 for 2 in the third over. Full updates: India Women vs New Zealand Women, 2nd T20I at Bangalore

Priest and Leigh Kasperek then built a 71-run stand for the third wicket to that got New Zealand back into the game. India would have felt that they had a sniff after back-to-back wickets of Kasperek and Priest but  Amy Satterthwaite and Katie Perkins ensured that there were no further hiccups and the White Ferns got home with 13 balls to spare.

Jhulan Goswami picked up to wickets bu she was on the expensive side today. Poonam Yadav and Rajeshwari Gayakwad were the other wicket-takers for India today.

Earlier, India Women reached a respectable total of  136 for 6 against New Zealand Women in the 2nd T20I at Bangalore. Vellaswamy Vanitha’s knock of   41 off 39 balls,opening the innings was pivotal in India reaching this competitive total. India got off to the worst possible start, as  skipper Mithali Raj was run out off the very first over of the match. Her wicket was soon followed by the wicket of Latika Kumari for just 4 in the second over.

There was a small partnership developing between Vanitha and Harmanpreet Kaur but the 45-run stand was cut short by Hannah Rowe when Harmanpreet was dismissed for 30. Rowe also picked up her first international wicket for the White Ferns. New player Veda Krishnamurthy then put on 37 for the fourth wicket with Vinitha to get India into a position from where they could have reached even 150. But after her loss, India lost a bit of momentum.

New Zealand bowlers did a fine job once again, restricting India to this score. Everyone played their parts in ensuring that they kept things tight. It was a total team effort by the White Ferns, who did not allow the match to slip away. 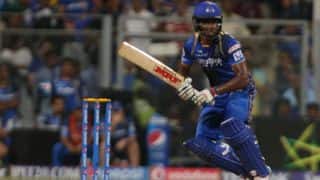