Radical Hindu groups on Friday demanded the cancellation of the first Pakistan cricket tour to India in five years and threatened to hold protests against the visiting side. 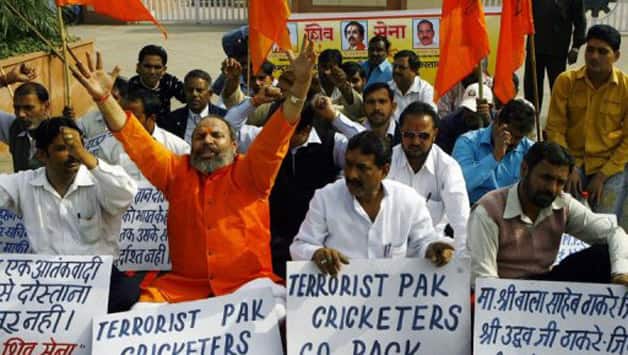 Radical Hindu groups on Friday demanded the cancellation of the first Pakistan cricket tour to India in five years and threatened to hold protests against the visiting side.

Pakistan will play five matches in India starting on December 25 in Bangalore, reviving cross-border cricket ties that were broken after the 2008 terror attacks in Mumbai by Pakistani militants.

The influential Vishwa Hindu Parishad or World Hindu Council said India should refuse to host the tour until Pakistan brings to justice the masterminds behind the Mumbai attacks that left 166 people dead.

“Why should we have sporting links with a country which is directing terrorism against us,” VHP spokesman Prakash Sharma told AFP.

“Pakistan is not even willing to accept evidence provided by India of its role.”

Pakistan in 2009 charged seven men over planning the Mumbai attacks, but insists it needs to gather more evidence in India before proceeding further.

Sharma declined to give details of any proposed protests, but security will be high for the games in Bangalore, Ahmedabad, Chennai, Kolkata and New Delhi.

“As far as cricket is concerned, we are certainly concerned about issues that relates to accountability for a very unforeseen attack on our citizens,” Khurshid told reporters in Gurgaon on the outskirts of New Delhi.

“It is a conflict on which there must be delivery of expectations that we have but we don’t want the clock to come to a standstill, the clock does move forward,” added the minister who was appointed last weekend to the portfolio.

Shiv Sena, a right-wing nationalist party based in Mumbai, on Thursday branded the tour a “national shame” and said Indian cricket authorities were “betraying the country for sake of money”.

India and Pakistan have fought three wars since independence in 1947, but their shared love of cricket will ensure huge interest on both sides of the border during the tour.

The cricket teams have met only in international tournaments since 2007.

India beat Pakistan in the 50-over World Cup semi-final in the northern Indian town of Mohali last year — a match that was attended by both countries’ prime ministers.

In 1999, protesters from Shiv Sena dug up the pitch in Delhi’s Ferozeshah Kotla stadium to protest against a tour by Pakistan, though the game was unaffected.