Though at least five spectators were hospitalised, the 'attack' did not pose a safety risk to the players, sources said.

Thiruvananthapuram: They came in a swarm and stung they did, as players sweated it out at the fourth one-dayer between India A and England Lions, flooring all of them at the Green Field International Stadium near here, for good 15 minutes.

Though at least five spectators were hospitalised, the ‘attack’ did not pose a safety risk to the players, sources said. The bee colonies have since been removed. (ALSO READ: Rishabh Pant, Shardul Thakur star as India A go 4-0 up against England Lions)

The ‘bee attack’ was similar to the one in 2008 in Delhi when the third ODI between South Africa and Sri Lanka was stopped for over an hour. Earlier, during a Test match between India and England at Delhi’s Feroz Shah Kotla stadium, bees forced Indian fielders, two Australian batsmen and umpires to hit the ground.

The sharp, teasing ‘attack’ on Tuesday was grim enough to make coach Rahul Dravid, who was taking a walk around the stadium, to run for his safety.

The play resumed only after security measures ensuring the bees stayed where they did at the upper deck of the west side were put in place. The spectators were shifted to the east side.

Speaking to IANS, an official who did not wish to be identified, said five persons, three from a family came under the attack.

“All five of them were given instant medical attention inside the stadium. As a matter of caution, all of them were taken to a hospital. Today workers have cleaned up the bee colonies,” said the official. (ALSO READ: Ankit Bawne to lead India A in first four-day match with England Lions)

The incident occurred around 11 am when a swarm of bees from the upper deck came out with just a handful of spectators in the upper deck. The 28th over of England Lions, who were batting, was on. The match had to be halted for 15 minutes, sources said.

India A team has won all the four matches and after Thursday’s match, the teams leave for a four-day match at the picturesque Wayanad Cricket stadium from February 7. 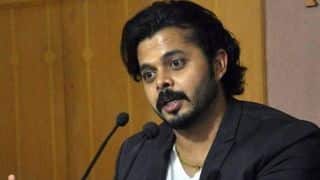