Dravid's encouragement and large-heartedness was again on display when he went up to the Canadian team and cheered them up after India had resoundingly thrashed them during the Under-19 World Cup practice match.

Rahul Dravid’s encouragement and large-heartedness was again on display when he went up to the Canadian team and cheered them up after India had resoundingly thrashed them during the ICC Under-19 Cricket World Cup practice match. India had amassed 485 for 6 in that game and bowled out Canada for a mere 113 to pull off a win by a mind-numbing 372 runs. Dravid took the time to go up to the young Canadian side after the match to console them. According to a report in Wisden India, Dravid told the Canada team not to get disheartened, and agreed to answer a few questions that the young team had for him. READ: Ishan Kishan leads India to mammoth 372-run win over Canada in ICC Under-19 Cricket World Cup 2016 warm-up match

Mamik Luthra said, “He said ‘don’t get disheartened by any means’ and explained that his boys played cricket outdoors, that they trained all the time and that they didn’t do any other thing apart from cricket. He said because of all that, his boys were more match-fit, and that they were accustomed to pressures of a match…He said we’re coming from the outside, but we can still catch up by the time we’re 23 or 24. If we train hard and do what is needed of us, if we do that, everything would fall into place.”

Luthra went on to say that despite the loss, they were happy. “We’ve seen him (Dravid) a couple of times in the hotel. He once went in the elevator with us, and we were just standing there gazing … that’s it. Nothing else. We were just looking at him. We couldn’t even say anything. Couldn’t say hi or bye. It’s a big thing. We have all seen him on TV, scoring so many runs for India, and suddenly, he’s there in an elevator with us. It was kind of like a reality check. We realised then that we were at a World Cup!” FULL UPDATES: India vs Canada, ICC Under-19 Cricket World Cup 2016

Meeting Dravid was a “big deal” according to Luthra. “It was a big deal meeting him. Everyone in the team was buoyed. Just to talk to someone who has played that much cricket. He is someone we look up to. Everyone wants to do what he has done. It was so special.”

Miraj Patel, Canada’s vice captain, said that it was a dream come true for him. “It was basically a dream come true for me, personally, and for a lot of the boys as well. Meeting Rahul Dravid is always a pleasure. He is a true gentleman in the sport, and his thoughts certainly gave me a boost to my game, and it has helped me out.” 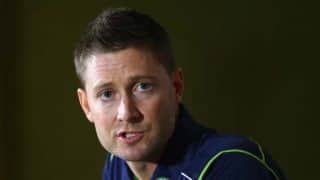