Former India captain Rahul Dravid on Monday evening shared a photograph of his India jersey for Test cricket, recalling making his debut at the home of cricket 20 years ago against England. Dravid made his Test debut on June 20, 1996 against England alongside former India captain Sourav Ganguly. The two went on to captain India in different time periods, setting strong examples in leadership as well as in batsmanship. Dravid played 164 Tests and 344 ODIs as well as only one T20 — against England close to 5 years ago in August 2011. Dravid, on Monday evening, recalled making Test debut with a post on Facebook. ALSO READ – Rahul Dravid: 10 little-known facts and anecdotes

Dravid retired from cricket after India’s poor tour of Australia in 2011-12, and since then he has been associated with cricket in some or the other way. He has been involved as the coach of India A and India Under-19 teams, as under his tutelage, the Under-19 team made it to the final of the World Cup held in Bangladesh earlier this year. ALSO READ: Rahul Dravid – your superstar next-door

The right-handed batsman remains a text book for batting as well as in leadership for many upcoming players. Dravid was criticised for being too slow in his approach in ODI cricket, but after 344 appearances, he ended up with 10,889 runs with 12 centuries and 83 centuries. 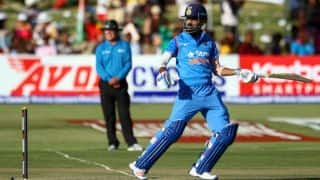