Just when the game was approaching the 20-over mark in Australian innings, rain interrupted the match once again. At least 4 more overs were required for a result at this stage and the Australian score read 83 for 1 35 more than the par score according to DLS method.

Australia, who were right on course to win their first match in the ICC Champions Trophy 2017, became cruel victim of the rain gods in their Group A clash against Bangladesh. Riding high on a fine stand between David Warner and Steven Smith, Australia fell just 24-balls away from a conclusive win. Needing a minimum of 20 overs to constitute a match, Australia played out 16 overs, when rain wrecked havoc on their hopes of a win. After teasing everyone for two and a half hour or so, the rains became quite heavy and at around 9.19 local time the umpires decided to abandon the match. This is second time in a row that Australia have been victimised by rains, as their opening match against New Zealand was abandoned due to rain (lucky for them) as well. Full Cricket Scorecard: ICC Champions Trophy 2017, Australia vs Bangladesh, Match 5 at The Oval

Chasing a modest 183, Australia started off after a slight delay due to rain on a confident note. Warner and Aaron Finch took one over each from the new ball bowlers before starting to play their shots. A few boundaries followed and the score was 40 without loss after 7 overs.

Skipper Mashrafe Mortaza then introduced Rubel Hossain into the attack, and the pacer made immediate impact, trapping Finch in front of the stumps. Finch scored 19 off 27 balls. He was then replaced by skipper Smith.

The captain and his deputy then kept up the tempo. There we no extravagant shots being played, but the scoreboard kept ticking. Warner in the meantime, completed his 4,000 ODI runs, becoming the fastest Australian, and joint 3rd fastest overall along with Virat Kohli, to do so. He also became the 16th Australian and the 6th left-hander to the landmark.

Just when the game was approaching the 20-over mark in Australian innings, rain interrupted the match once again. At least 4 more overs were required for a result at this stage and the Australian score read 83 for 1 35 more than the par score according to DLS method. That was it, as the match never commenced from this stage and Australia were robbed of a win.

Earlier, Tamim Iqbal s fighting 95 could not avoid Bangladesh from getting bowled out for a paltry 182. Batting first, Bangladesh s batting was all about Tamim, who scored over 50 percent of his team s runs. Only two other batsmen could get into the double figures Shakib Al Hasan (29) and Mehedi Hasan Miraz (14).

Tamim extended his purple patch, registering third successive fifty plus score in ODIs. He held the innings together beautifully, and was often forced to take the defensive approach with wickets tumbling at the other end, as other batsmen struggled against the Australian bowlers. Soumya Sarkar hardly moved his feet while Mahmudullah and Sabbir Rahman threw their wicket away playing loose shots. Mushfiqur Rahim was unlucky to get leg-before while he had actually edged the ball on to his pads. But his unawareness cost him since he did not go for the review.

Tamim kept going at the other end, completing his 37th ODI fifty. But Mitchell Starc came back to wrap up the Bangladeshi innings with his sudden burst picking up 4 wickets in the space of just 9 balls and 1 run to reduce Bangladesh from 181 for 6 to 182 all-out. He sent down the three-wicket maiden 43rd over to dismiss Tamim, Mortaza and Rubel Hossain, missing hat-trick as Mustafizur Rahman miraculously survived, before knocking off Mehedi in the 45th over. Starc finished with 4 for 29. Adam Zampa took 2 while all other regular bowlers chipped in with wickets as well. 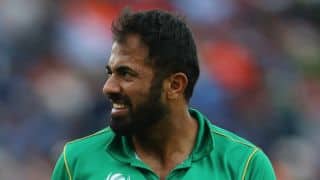 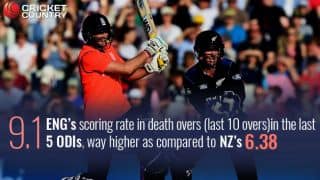