Chennai Super Kings struggled on a two-paced surface, but Michael Hussey showed self-restraint and Suresh Raina adapted well to push the home side to a good total. 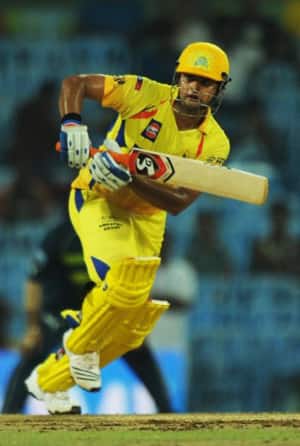 Chennai Super Kings struggled on a two-paced surface, but Michael Hussey showed self-restraint and Suresh Raina adapted well to push the home side to a good total. The first half the innings didn t make for exciting viewing , but the second half brought a flurry of runs for CSK 64 runs came between overs 15 and 19 – as they attempted to gain leverage on the points table.

CSK s slow start saw Murali Vijay eat up 14 deliveries before he made room to an arm ball from Pragyan Ojha and heard the death rattle, and Hussey dropped by Cameron White at square leg in the same over. Just 34 runs came from the Powerplay six runs under what CSK have averaged this season during that block – with just three boundaries.

With Deccan Chargers doing well to take pace off the ball, many of the batsmen s shots dribbled into the outfield instead of speeding to the boundary. Raina chose to concentrate on timing the ball as best he could; he refrained from going for his typical expansive drives and heaves over the leg side, and instead scored with pushes and nudges. Hussey too worked the angles for singles as DC kept the batsmen on a leash.

Something had to give, and the push inevitably came from Hussey, who reverse-swept Amit Mishra for consecutive fours in a 12-run 12th over. Trying to further accelerate, Hussey pulled Harmeet Singh to deep square leg for 46. Out walked MS Dhoni, who pulled his first ball behind square for four, and Ojha returned after that solitary successful over to nearly had Raina caught at deep square leg but the ball bounced short of a diving fielder.

The innings was set for a final push after 14 overs, with the score 88 for two and Raina and Dhoni starting to purr. Ishant Sharma returned to be cut firmly for four, Mishra came back on and was taken for sixes by Dhoni and Raina, before Raina helped CSK take 15 off Harmeet s third over.

Raina s exit for a well-made 59 was followed by Albie Morkel smashing a hat-trick of sixes off Ishant. Ojha did well to bowl a tidy final over that included the wickets of Morkel and Dhoni, but CSK have turned an attainable total into a commanding one.