RR managed to win their first game after six outings in IPL 2015.

Rajasthan won by 14 runs
Man of the Match: Ajinkya Rahane

The Rajasthan Royals (RR) got back to winning ways in the Indian Premier League (IPL) 2015 as they beat the Delhi Daredevils (DD) by 14  runs at the Brabourne Stadium, Mumbai. Having lost three out of the last five games, which included two rained-out affairs, RR were desperately searching for a victory and managed a comfortable one at their new home ground. This game also marked the 500th game in IPL history. READ: IPL celebrates 500th game

Chasing 190 to win, DD were strangled by RR. They lost their openers early in the innings and then were led by skipper JP Duminy, who got a fifty. However, they lost wickets at regular intervals and did not get a substantial partnership. The pressure kept mounting on DD and they gave into it, unable to set the tempo to challenge the RR score. Duminy was the top scorer with 56. The DD innings fizzled out in the end and RR won it quite comfortably without a scare. Live Scorecard: Rajasthan Royals vs Delhi Daredevils, IPL 2015

Earlier, RR had been put in to bat and had a tough time to begin with. Shane Watson took his time to get in as Ajinkya Rahane started well. As the innings progressed, they got their act together, putting up 52 inside seven overs. That brought Karun Nair in and he put up a strong 113-run stand with Rahane. It was a phase where RR took complete control of the game. Live Updates: Rajasthan Royals vs Delhi Daredevils, IPL 2015

DD had themselves to blame for a major part of the innings. They dropped catches, misfielded and committed basic errors on the field. As a result, they leaked runs and it only hampered their cause. The wicketkeeper, Kedar Jadhav also struggled to get used to the pace of the game as he conceded too many byes. RR went on to capitalise on that and built a strong total.

The Rahane-Nair partnership was eye-catching in the aesthetic sense. The duo played good cricketing shots and dealt with the pacers very well. With DD’s fielding all over the place, they used the opportunities to pile the misery. There were times when the walked across their stumps to play on the leg-side, but it as largely a classy performance. Rahane remained unbeaten on 91 and Nair managed to score 61. 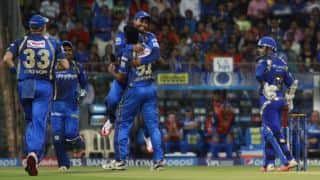 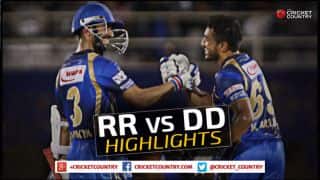