However, ACSU chief Ravi Sawani decided not to comment on the incident.

Two years after the shocking Indian Premier League (IPL) 2013 spot-fixing controversy broke out, another Rajasthan Royals (RR) player was approached by a Ranji Trophy teammate with offer of money if the former played according to the instructions. Indian Premier League 2015 schedule: IPL 8 match time table with venue details

As reported by Indian Express, it is said that the Mumbai-based Rajasthan player did not accept the offer and went on to report the incident to the Anti-Corruption & Security Unit (ACSU) of the Board of Control for Cricket in India (BCCI).  IPL 2015: CSK, KKR, RCB, KXIP, MI, RR, SRH, DD full team details in IPL 8

However, ACSU chief Ravi Sawani decided not to comment on the incident. BCCI Secretary Anurag Thakur took Twitter to express happiness over the player approaching BCCI on the matter.

Players are alert & they know wat is to be done due to our regular education efforts @BCCI. @PTI_News @ANI_news — Anurag Thakur (@ianuragthakur) April 10, 2015

Justice Mukul Mudgal, who formed the committee which looked into the IPL 2013 spot-fixing controversy was also pleased with the action of the player. However, former India cricketer and politician Kirti Azad slammed IPL for fixing.

IPL player did right that he communicated about the offer to BCCI anti corruption unit: Justice (retd) Mukul Mudgal pic.twitter.com/eqQYuOibRX

I am not surprised that offer has been given to one of Rajasthan Royals player: Kirti Azad, frmr cricketer pic.twitter.com/S3FeEnGjoE

Ahead of the IPL 2015 kicking off, Rajatshan mentor and former India skipper Rahul Dravid spoke about tackling fixing.

“One of the most important things is we need to have stricter laws that deal with issues like match-fixing, spot-fixing. And we need to have those laws in place that in the long term can act as a deterrent,” Dravid said. “There are consequences in cricket (for wrongdoing) and you pay the price.” 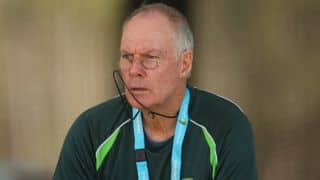