Organisers said winners had to be over 18 years old.

It was a case of bad luck for for two young cricket fans who caught sixes hit by players in the Ram Slam T20 2014 tournament in South Africa but they were disqualified due to their age from sharing a million rand in the latest competition to lure more people to the stadiums.

Cricket South Africa(CSA) had earlier announced that anyone in the stands catching a sixer with one hand before it bounced would qualify for the huge bounty. Multiple qualifiers would share the million rands at the end of the tournament.

Friends of Liam Banks, a pupil at St.Davids College in Johannesburg, was overjoyed when he caught a sixer hit by Henry Davids in the opening game of the tournament at the Wanderers Stadium here on Saturday.

But the scholar’s joy was short-lived when organisers pointed out that in terms of the rules, winners had to be over 18 years old.  Banks will only turn 18 in four months’ time.

Even Davids balled his fists in congratulations from the field as Banks caught his ball,with the thought of having more money than he could ever dream of having Banks jumping up and down in excitement as his friends around him congratulated him as well.

But the dream became a nightmare very quickly when the smiles on Banks’s face turned to shocked disappointment. Although Banks said he was not aware of the rules, spokesman for the organisers Neil Jankelowitz said the rules, including the age restriction, were repeatedly announced on the public address system at the stadium.

“We would certainly like to make the competition as inclusive as possible, but we decided that it would be irresponsible to let any minor win such a huge amount,” Jankelowitz said as he tendered regret to Banks. A day later, 15-year-old Arno Kotze found himself in the same situation when he caught a six hit by Chris Gayle at the second match in the series. 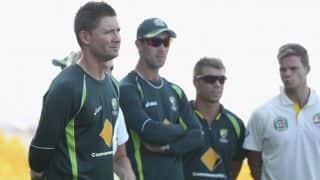