Rameez Raja: I don't know where Pakistan cricket is going

Rameez Raja: I don't know where Pakistan cricket is going
By Press Trust of India

Karachi: Disappointed at the team’s dismal showing against Bangladesh in the ongoing series, cricketer-turned-commentator Rameez Raja said that Pakistan cricket has slipped into depression after the side’s misfortunes continued in the Test matches as well. After being whitewashed in the 3-match ODI series and the one-off T20, Pakistan failed to defeat Bangladesh in the first Test, which ended in a high-scoring draw. READ: Bangladesh earn a draw against Pakistan

“It is depressing that our team allowed Bangladesh to score over 550 runs in the second innings after taking a nearly 300 runs lead in the first innings of the Test,” Rameez said on Saturday. Pakistan managed to score 628 in reply to Bangladesh’s first innings score of 332 in Khulna, but the hosts fought back with 555 for six in the third innings of the Khulna Test. It’s the first time in nine Tests that Pakistan have failed to defeat Bangladesh. READ: Imran Khan calls for overhaul in Pakistan’s domestic structure

“I just don’t know where our cricket is going. If we can’t beat Bangladesh in a Test where are we headed? If this trend continues than who will want to watch or invite our team to play? It will hurt Pakistan cricket brand,” Rameez said on Geo News from India.

The former opener, who has remained CEO of the Pakistan cricket board in 2003 and 2004, said he had never seen such a listless bowling performance from Pakistani bowlers in all his years. “Look Bangladesh has improved their cricket and their approach is also different but if our bowlers can’t put them under pressure even with a 300 runs lead than what can they do. The way they (Bangladesh) batted in the second innings it should be an eye opener for our cricket,” he added.

Referring to the verbal duel and finger wagging incident between Shakib ul Hasan and Wahab Riaz on the final day of the Test, the former Test captain said sarcastically that such a day had to come when Bangladesh players were looking eye to eye with Pakistani players. “They got a boost from the World Cup and they are building on that in contrast our cricket is going nowhere and you are not seeing any urgency or desire to do well in our team.” He made it clear that Pakistan cricket had to quickly start looking for fresh talent as no amount of coaching or planning would bear any results.

Another former captain, Mohammad Yousuf was also critical of the team’s performance in Khulna. “Today we didn’t draw but we lost the test in Bangladesh. It is really upsetting for former players like us,” he stated. Yousuf said Pakistan couldn’t beat Bangladesh now because in the last five to six years the Bangladesh Cricket Board (BCB) took the right decisions and in comparison the Pakistan Cricket Board (PCB) didn’t do anything to move us forward in these years.

“Bangladesh cricket is being run through proper channels. What happened today the incident between Shakib ul Hasan and Wahab Riaz you couldn’t imagine some years back it is only because they are improving as a cricket playing nation,” he said. “Even if the Pakistan team goes down from ninth position to 900th position, nothing will change in Pakistan cricket board. They only want yes men in the board and that is why our cricket is going downhill,” Yousuf added. 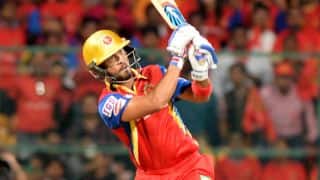