Tamim's knock resulted in many records being broken.

Bangladesh‘s opening batsman, Tamim Iqbal scored an impressive double-hundred as Bangladesh earned a respectable draw over one-off South Asian giants, Pakistan, on Day 5 of the first Test of the two-match Test series, at Sheikh Abu Naser Stadium in Khulna on Saturday. His knock resulted in many records being broken as both the teams more or less shone with bat rather than with the ball. Scorecard: Bangladesh vs Pakistan 2015, 1st Test at Khulna, Day 5

Earlier, on Day 1, Bangladesh skipper, Mushfiqur Rahim won the toss and elected to bat first on a flat batting track as they finished their innings after being bowled out for 332 on Day 2, owing to a healthy knock of 80 from Mominul Haque and opener Imrul Kayes‘s 51.Wahab Riaz and Yasir Shah claimed three wickets each in the innings. READ: Bangladesh break numerous records Day 4

The Pakistan innings saw thing changing in favour of Pakistan as they batted brilliantly, followed by a healthy knock of 224 from Mohammad Hafeez, who also became the highest individual scorer for Pakistan against Bangladesh in Test cricket. Apart from him, few healthy knocks from Azhar Ali, Misbah-ul-Haq, Asad Shafiq and Sarfraz Ahmed also helped Pakistan register a healthy total of 628. Taijul Islam claimed six wickets during the Pakistan innings as Pakistan led by 296 runs. Updates: Bangladesh vs Pakistan, 1st Test, Day 5 at Khulna

However, the second innings saw the unthinkable happening from the Bangladesh openers, as Tamim and Kayes put-up a whopping and record-breaking partnership of 312, shattering almost all records. It was followed by a brilliant innings of 206 from Tamim, thus becoming the highest individual run scorer for Bangladesh in Test cricket. READ: Bangladesh have the edge over Pakistan at the end of Day 1

It was also a healthy innings from Kayes, who scored his maiden 150 in Test cricket, followed by Shakib Al Hasan‘s unbeaten 76 that helped Bangladesh earn a healthy draw over the neighbours. Junaid Khan and Zulfiqar Babar claimed a couple each, but overall, it was not a healthy performance from the bowlers, as both the teams had to settle for a draw as they move into the second Test at Dhaka from May 6. Tamim was adjudged the man of the match for his mammoth innings of 206. READ: How Pakistan turned things around on Day 2 DD vs KXIP IPL 2015: David Miller believes that it was difficult to bat at Ferozshah Kotla 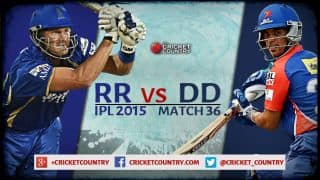