Ramesh Powar had been associated with Mumbai Cricket Association (MCA) since the past six months.

Former India  off-spinner Ramesh Powar has quit as the spin coach of the Mumbai Cricket Association’s cricket academy, it was learnt here today. Powar, who played for India in both Tests and One-Day Internationals, and also featured in the Indian Premier League (IPL), had been associated with the academy since the past six months, a senior MCA official, who did not wish to be named, told PTI.

Powar resigned yesterday due to “personal reasons”, the official maintained, adding that his resignation will now be placed before the Managing Committee of the cricket body for approval. Asked whether the MCA has initiated the process to select Powar’s successor, the official replied in the negative. 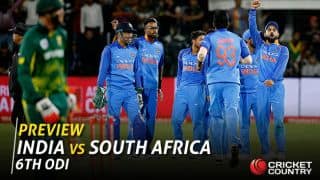 India vs South Africa, 6th ODI: India aim to put lower order in spotlight with an eye on 5-1 scoreline