Sri Lanka took the final three wickets in four balls to complete a historic 208-run win over South Africa on the fourth day of the second Test at Kingsmead on Thursday. 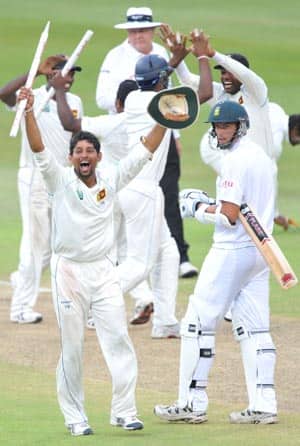 Sri Lanka took the final three wickets in four balls to complete a historic 208-run win over South Africa on the fourth day of the second Test at Kingsmead on Thursday.

There were wild scenes of celebration on the pitch when Rangana Herath bowled Marchant de Lange in fading light with only nine balls remaining in the day.

The team reserves and management ran on to the field to join their triumphant teammates.

It was Sri Lanka’s first win in South Africa on four Test tours and their first win of a previously bleak 2011. It was also the team’s first win under Tillekeratne Dilshan’s captaincy and levelled the three-match series at 1-1.

Set to make 450 to win, South Africa were bowled out for 241. Left-arm spinner Herath took five for 79 and had match figures of nine for 128.

He was named man of the match.

Sri Lanka seemed set for an early victory when South Africa lost five wickets between lunch and tea to be reeling at 133 for six shortly before the interval.

But AB de Villiers and Dale Steyn denied the tourists any further success as they put together a seventh wicket partnership of 99 which threatened to take the match into a fifth day.

De Villiers atoned for a reckless shot which cost him his wicket in the first innings with a solid 69, while Steyn again showed up some of his top order teammates, following up his first innings 29 not out with a fighting 43.

Sri Lanka were forced to take the second new ball but with the light fading rapidly the fast bowlers sent down only three overs before Dilshan returned to spin.

Morne Morkel hit five runs before he was also lbw after missing a wild slog against Dilshan off the last ball of an over and Steyn fell to Herath off the next delivery, to be followed two balls later by De Lange.

South Africa’s problems started when fast bowler Dilhara Fernando dismissed Graeme Smith for 26. The South African captain was surprised by a ball which lifted sharply for him to be caught at first slip off the shoulder of his bat.

Hashim Amla and Jacques Rudolph stabilised the innings with a second wicket stand of 51 but the match swung dramatically in Sri Lanka’s favour in the first over after lunch when Rudolph fell to a spectactular diving catch at second slip by Mahela Jayawardene off Thisara Perera.

Jacques Kallis completed his first ‘pair’ in 149 Tests when he was caught at short leg off Herath when he attempted a sweep, the ball skidding off a top edge onto his helmet and then up in the air to present Tharanga Paranavitana with an easy catch.

Sri Lanka’s chances soared when Amla, after making a fluent 51, drove Herath to Chanaka Welegedera at mid-on and set off for a suicidal run.

Batting partner Ashwell Prince did not respond and Amla was given out when both batsmen found themselves at the wrong end when the wicket was broken.

The out-of-form Prince fell to another lifting delivery from Fernando, caught at first slip, and a miserable afternoon for the hosts was completed when Herath trapped Mark Boucher leg before wicket, leaving De Villiers as the last recognised batsman.

Sri Lanka were all out for 279 in their second innings earlier in the day, losing their last three wickets for 23 runs. Two of the wickets fell to fast bowler Dale Steyn, who took five for 73. It was his 17th five-wicket haul in Tests. (AFP)

Man of the match: Rangana Herath