Herath, Test cricket s tenth most successful bowler with 430 wickets from 92 appearances, will retire after the first Test in Galle.

Nasser Hussain, the last England captain to win a Test series in Sri Lanka, believes that the retirement of left-arm spinner Rangana Herath after the first Test in Galle is a terrific chance for Joe Root s team to to win their first series in the country since 2001.

Herath, Test cricket s tenth most successful bowler with 430 wickets from 92 appearances, announced today that he will retire after the Galle Test and Hussain feels that his absence for the second and third Tests in Kandy and Colombo will be huge.

“It’s a massive bonus. You are better off being lucky than classy in cricket and that is a key break for England,” the former England captain told Sky Sports Monday. Sri Lanka have a few good spinners but he is the main threat, make no mistake. Since Murali retired, he has got 40 per cent of their wickets in Sri Lanka, so he bowls one end. He is the new Murali basically.

Of active Test bowlers, Herath has the third most wickets after the England pair of James Anderson (564) and Stuart Broad (433). Since the retirement of Sri Lanka s most successful bowler, Muttiah Muralitharan, in 2010, Herath has claimed 359 wickets in 70 Tests at an average of 25.98.

“He has been around forever and is a good, old-fashioned pro, said Hussain. There is no mystery, no doosra, no carrom ball, he doesn’t worry about batting or fielding – he just runs up and bowls left-arm spin.” 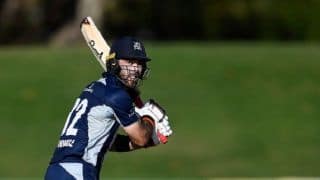