Karnataka have gone into lunch at 343 for two on Day Three of their Ranji Trophy 2013-14 final at the Rajiv Gandhi International Stadium, Hyderabad. Lokesh Rahul and Ganesh Satish’s tons laid a solid platform and then Robin Uthappa walked out to the centre to dominate and take Karnataka past Maharashtra’s total. At lunch, Karnataka lead by 38 runs.

The session started with Chirag Khurana snaring the centurion Ganesh in the very first over. The ball turned into him and Ganesh was rooted to the crease as it crashed into the stumps. However, Uthappa, who had retired hurt on Day Two, walked back in and started playing aggressively.

Meanwhile, Rahul was approaching his ton and moved closer with a few singles. He then swept Khurana to square-leg to reach the milestone and celebrated his fourth First-Class ton.

It was then that Karnataka took the attack to the Maharashtra spinners. Uthappa danced down the track and smashed Khurana into the stands at long-on. Rahul waltzed to Akshay Darekar and quite easily lofted him over long-off. It was a shot that showed his class as he went through with it quite effortlessly.

Rahul and Uthappa got Karnataka closer to Maharashtra’s score and Rohit Motwani then opted for the new ball. Anupam Saklecha induced Uthappa to play a false stroke through the slips and it flew past Kedar Jadhav even froe he could react. That was Maharashtra’s sixth dropped chance of the innings.

But, Uthappa was unfazed as he kept smashing the bowlers around the ground. They inched past Maharashtra’s score and then Rahul got a significant milestone i.e. 1,000 runs for the season.

However, soon after, Rahul was dismissed as he chased a wide one off Shrikant Mundhe and Motwani, at last, took the catch.

Manish Pandey walked and continued the attack with Uthappa as lunch was taken. 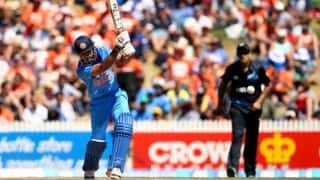 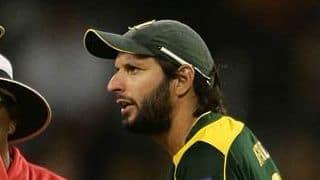 Shahid Afridi has a cricket ball as an on-field snack!