Karnataka take tea at 120 for three in the second innings.

Karnataka are inching closer to their seventh Ranji Trophy triumph as tea was taken on the fifth day of the final against Maharashtra at the Rajiv Gandhi International Stadium, Hyderabad. Chasing 157 to record an outright victory, Karnataka are 120 for three.

Karnataka’s chase started before lunch, but once they returned, Lokesh Rahul and Robin Uthappa took the attack. Uthappa started things off by smashing a few boundaries. When the spinner came in, he was ready to charge to him and tried to unsettle his rhythm. There were a few hits he smashed down the ground for four.

Rahul then turned it on, seemingly influenced by Uthappa. When Chirag Khurana came in, he was smashed for two sixes over long-on and then smashed through point for a four.

Uthappa carted Akshay Darekar for a four over his head and then tried to play a deft sweep. Instead, the ball hit his bat and lobbed up, as the first-slip took the catch.

Amit Verma came in at No 3 as Ganesh Sathish injured himself while fielding. He immediately had a life as he edged to the keeper off Darekar, but was put down.

Rahul was then dismissed as he edged one from Shrikant Mundhe and was taken in the slips.

But, Verma continued to hit it around and later Manish Pandey also came in and played with positive intent. Verma has been impressive as he has used his feet to the spinners to perfection. He charged and lofted with ease and also rocked back onto the backfoot to cut behind point.

The left-handed batsman was dismissed in the 30th over when Khurana took a sharp return catch.

The atmosphere in the Karnataka dressing room would be one of expectation as they are now inches away from triumph. Remember, eight of the current team members were a part of the side that lost to Mumbai in a tight clash in 2010. 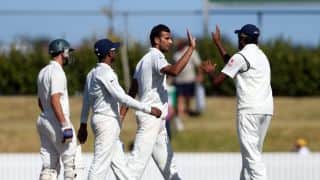 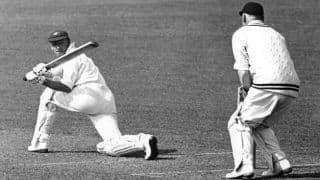