Bengal have moved to 65 for two in their Ranji Trophy 2013-14 semi-final against Maharashtra at Indore. Maharashtra had scored 455 in reply to Bengal’s first innings total of 114. Now, Bengal are fighting to overhaul Maharashtra’s score. However, they would also have to take control and then bowl them out.

Early in the day, Anupam Sanklecha, who had a good spell in the quarter-final against Mumbai, dismissed Abhimanyu Easwaran. The batsman was dismissed leg-before for only six and Bengal were reduced to 34 for two.

It was then that Sudip Chatterjee walked out to bat and joined Arindam Das.

In the first innings, Das had essayed a gritty knock, but Bengal need a bigger effort this time. 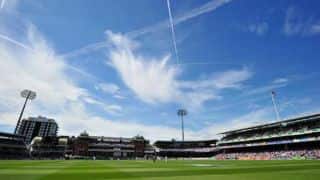 Pakistan Cricket Board to oppose proposed changes in ICC