Rajasthan declared at 437 for five in their first innings as Vidarbha reached 180 for three.

Former India Under-19 captain Ashok Menaria struck an unbeaten century to help Rajasthan post 437 for five declared against Saurashtra on Day 3 of their Group B Ranji Trophy match at Jaipur on Tuesday.

Making a strong reply in the four-day encounter at the Sawai Man Singh Stadium, Saurashtra were 180 for three when bad light ended Tuesday’s play an hour early.

The visitors lost Chirag Pathak (20) and Sheldon Jackson (zero) quickly but half-centuries by Sagar Jogiyani (68) and Arpit Vasavada (56 not out) played valuable knocks. The Jaydev Shah-led side still trail by 257 runs.

Earlier starting on their overnight score of 264 for two, Rajasthan top and middle order combined well to frustrate the Saurashtra attack.

If Maneria (100 not out) struck his seventh first-class century then Robin Bisht was unlucky to get out on 99. The contributions came after opener Vineet Saxena’s 118 on the second day. 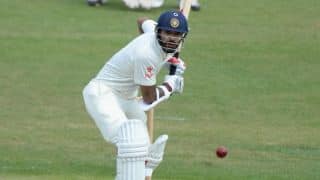