Karnataka declared their second essay on 394 for eight today with Samarth being the top scorer with 131 off 199 balls, including 12 boundaries.

Guwahati: Ravikumar Samarth hit a brilliant century to help Karnataka post 394 for eight declared in their second innings and set a massive 388-run target for Assam on Day three of the Ranji Trophy Group A cricket tie here today. At stumps, Assam were reduced to 30 for one in their second innings with Pallavkumar Das batting on 21. Assam lost their opener Sibsankar Roy on the last delivery of the day. Suchith J, who had a disappointing first innings where he had managed just one wicket, struck early in the second innings removing Roy for a 30-ball eight. The inexperienced Assam will aim for a draw tomorrow, which is the last day of the match for a reason that it is unlikely for an for them to go pass the side that features the likes of Vinay Kumar, Karun Nair, CM Gautam and Robin Uthappa. Read: Ranji Trophy 2015-16, Stumps, Day 3: Assam need 354 runs to beat Karnataka

Resuming on 77 for no loss, Karnataka declared their second essay on 394 for eight today with Samarth being the top scorer with 131 off 199 balls, including 12 boundaries. Mayank Agarwal (47), CM Gautam (44), Shrayas Gopal (41) and Shishir Bhavane (40) also chipped in with crucial runs. Although Assam had earlier taken a slender seven-run first innings lead, tomorrow the hosts would have to play out of their skins to save the match. Assam require 358 more runs on the fourth and final day tomorrow with nine wickets remaining. 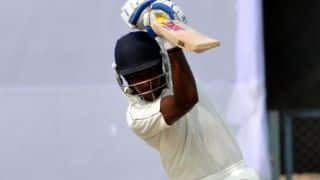