Punjab recovered from an early slump to reach 248 for eight at stumps on the opening day of their Group B Ranji Trophy match against Uttar Pradesh.

Kanpur: Mayank Sidhana and Gitansh Khera struck gritty fifties to help Punjab recover from an early slump to reach 248 for eight at stumps on the opening day of their Group B Ranji Trophy cricket league encounter against Uttar Pradesh. UP medium-pacers rattled the Punjab top-order after inviting the visitors to bat at Green Park. Openers Manan Vohra (15) and Jiwanjot Singh (2) departed early while Uday Kaul (16),Mandeep Singh (25) and Yuvraj Singh (16) also could not last long. It was then that Sidhana (85) and Khera (73 not out) stitched a 138-run sixth-wicket partnership to give some respectability to the visitors’ score. UPDATES: Uttar Pradesh vs Punjab, Ranji Trophy 2015-16, Group B match, Day 1 at Kanpur

But out went Sidhana after his 141-ball stay at the crease, which was laced with 10 fours and a six and Punjab lost three more quick wickets. Khera though has stood firm at one end only to be running out of partners. Ankit Rajput led the charge by picking up three wickets while Praveen Kumar (2-76) and Akshdeep Nath (2-7) bagged two scalps apiece. Sharing the new ball with Praveen, Imtiaz Ahmed also chipped in with a wicket. The two teams are battling hard to gain a quarterfinal berth with a couple of more league games left for both the sides.

Punjab are currently ranked fifth in the points table with 17 points. Uttar Pradesh too have 17 points but they are placed one spot below owing to Punjab’s better net run rate. Both the teams have played six matches and won two each. Punjab has lost two while drew two games while Uttar Pradesh lost one but drew three matches. Punjab lost their last match against Baroda by an innings and 116 runs. Uttar Pradesh, on the other hand drew their previous match against Tamil Nadu. READ: Ranji Trophy 2015-16, full coverage here 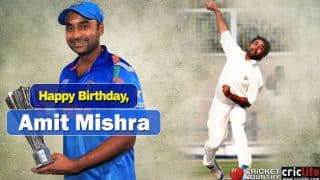