Ranji Trophy 2016-17, Day 3, Round 5, highlights and match results: Tamil Nadu rout Baroda by an innings a

Tamil Nadu skipper Abhinav Mukund top-scored in the match with 100.

Tamil Nadu have thrashed Baroda by an innings and 44 runs in Ranji Trophy 2016-17, Round 5 at Raipur.With this win Tamil Nadu have earned 7 points 6 for outright win and 1 for winning by an innings. They now have 17 points to their credit and whether they go top of Group A or not will depend on the results of other matches. Krishnamoorthy Vignesh was the pick of the bowlers for Tamil Nadu, finishing with eight wickets in the match, including a five-wicket haul in the first innings. Baroda resumed Day Three on 44 for no loss, still trailing Tamil Nadu by 200 runs. With 10 wickets in hand Baroda had a chance to avoid the innings defeat. But yet another clinical performance from the Tamil Nadu bowlers ensured that they won the game by a huge margin, with one day to spare. Full Cricket Updates Ranji Trophy 2016-17, Day 3, Round 5

After bowling Barda out for just 93 in their first innings, Tamil Nadu skipper led from the front and scored a hundred, which took them to 337, taking a 244-run lead. Baba Indrajith and Dinesh Karthik too scored fifties to ensure that Tamil Nadu got a good score on the board. Baroda in their second innings got off to a good start with openers Kedar Devdhar and Dhiren Mistry putting on 59 for the first wicket. From 59 for no loss, Baroda lost their way and were struggling at 139 for 8 at one stage. Soaeb Tai (69 not out) and Murtuja Vahora put on 61 for the seventh wicket to ensure that Baroda inched closer to avoiding the deficit. But vahora and last batsman Munaf Patel were dismissed for consecutive deliveries to hand Tamil Nadu a huge win. 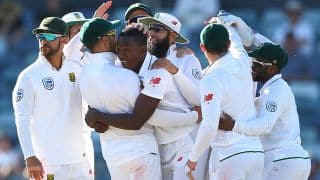