Ishan Kishan on Saturday played a brilliant innings as he scored an unbeaten 162, while he also steered Jharkhand to a steady total of 359 for the loss of six.

Wicketkeeper-batsman Ishan Kishan on Saturday played a brilliant innings as he scored an unbeaten 162, while he also steered Jharkhand to a steady total of 359 for the loss of six wickets, vs Delhi on Day 1 of Round 5 of the ongoing Ranji Trophy 2016-17 at the St Xavier’s College Ground in Thiruvananthapuram. Apart from Kishan, Ishank Jaggi also played a strong innings of 55, while Pratyush Singh scored 45. As for the Delhi bowlers, Suboth Bhati and Varun Sood have claimed a couple of wickets each. Earlier, it was Delhi who won the toss and elected to bat first, as it turned out to be a good decision as of now. Ranji Trophy 2016-17 Points Table & team standings

Delhi bowlers frittered away the initial advantage as Ishan Kishan’s brilliant unbeaten 162 enabled Jharkhand to reach a comfortable 359 for six in a group B encounter of the Ranji Trophy on Saturday. It was a day when Delhi captain Unmukt Chand used as many as nine bowlers with only Vaibhav Rawal and wicketkeeper Rishabh Pant not rolling their arms over. Left-handed Kishan played a counterattacking innings as he hit 14 boundaries and six huge sixes in his undefeated 213-ball knock. The former India U-19 captain came in when Jharkhand were struggling at 80 for 4, reported PTI. LIVE Cricket Updates, Ranji Trophy 2016-17, Day 1, Round 5

Along with experienced Ishank Jaggi (55), he added 116 runs for the fifth wicket. Jaggi played 89 balls hitting 10 fours in the process. Once Jaggi was out, Kaushal Singh (39) gave support as he dropped anchor at one end in their 120-run stand in 28 overs for the 6th wicket with Kishan taking charge, added PTI. 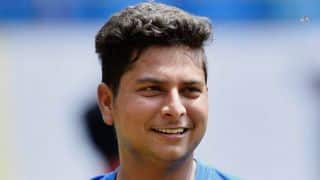