Services' bowlers will have to dismiss Kerala under 350 while centurion Sachin Baby's unbeaten 112 keeps his side in the hunt to get over 400.

On Day Three from Round 9 game of Ranji Trophy 2016-17, Kerala ended day at 271 for 5, trailing Services by 51 runs. The match is truly heading for a draw but both sides will be eyeing a first innings lead to take points in their kitty. Services’ bowlers will have to dismiss Kerala under 350 while centurion Sachin Baby’s unbeaten 112 keep his side in the hunt to get over 400. Even though a result looks out of proportion due to bad weather, Day Four promises to be a cracking contest between both sides at Karnal Singh Stadium, Delhi.

Earlier in the match, Kerala won the toss and elected to bowl. Services got off to a poor start as they were reeling at 43 for 4. Nonetheless, a timely century from opener Anshul Gupta and fifty from Rahul Singh made sure their side crossed the 300-run mark. Their lower-order added 95 runs which proved essential for them going forward in the match. From Kerala s point of view, Athif Bin Ashraf took a four-wicket haul while Sandeep Warrier and Akshay Chandran shared two scalps each. Iqbal Abdulla also bowled well and got a solitary wicket in form of Sachidanand Pandey.

In reply, Kerala were also reduced to 74 for 4 with their top-order being shaky. Irfan Khan’s early inroads ensured Services got off to a flying start but Kerala’s middle-order staged a comeback. Baby’s 112 not out off 248 balls and Jalaj Saxena’s 84 led Kerala’s fightback when they looked in precarious situation. The duo shared a 187-run stand and took their side close to Services’ score.

Baby is still unbeaten whereas Jalaj got out for 84. Bad weather has already chunked off a large portion of the game and any result looks out of card. Nonetheless, the two sides will be eager on taking a first innings lead and end the match on a high. 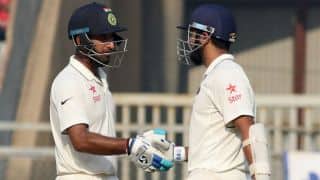