Haryana thrashed Tripura by a massive margin of 119 runs in their Group C, Round 9 affair in the ongoing Ranji Trophy 2016-17.

Haryana thrashed Tripura by a massive margin of 119 runs in their Group C, Round 9 affair in the ongoing Ranji Trophy 2016-17. Haryana gained complete control at Eden Gardens in Kolkata, after being put into bat first against Tripura. Starting Day Three, Haryana had 6 wickets left in their kitty with a lead of 239 runs .Haryana reached their 200-run mark in the 48th over, and suffered a mini collapse. It was only Joginder Sharma’s late-order fight that enabled Haryana reach 261. Bunti Roy started for the ball for Tripura, getting an impressive figure of 42 for 4. Asked to chase down a target of 315 runs, Tripura showed dismal batting skills, losing Udiyan Bose and Bishal Ghosh early into their second innings. Both wickets were taken by Harshal Patel. Samrat Singha and Smit Patel did show determination of bat, but fell to the continuum.

Singha went for a 33-ball 19 to Mohit Sharma, while Smit’s wicket was nabbed by Joginder for 24.Aniruddha Saha could not do much himself, became Sanjay Pahal’s first wicket. Rajat Dey could only add 7 runs before he gave away his wicket to Joginder. With Tripura languishing on 65 for 7, it was Manishankar Mura Singh and Gurinder Singh, who only delayed the inevitable. The pair added 96 before the tea break with Tripura adrift 148 more runs to win, with the team on 167 for 7.

Post tea, Tripura lost Gurinder Singh on a score of 62, which came from 45 balls. With this Pahal also picked up his second wicket. Roy’s stay did not last long, as he got run out for 0. Pahal picked his third scalp, and finished off Tripura’s chase after getting Mura Singh for 60. Harshal, Mohit and Joginder picked up two wickets apiece to end up becoming Pahal’s perfect foil.

Earlier in the game, Haryana scored 231 runs in their first innings, with as Tripura scored 178 runs to hand the former a lead of 53 runs. 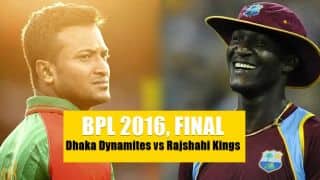 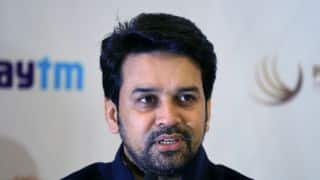