Uttar Pradesh were riding high as they scored a good total of 300 for the loss of six wickets vs former champions Punjab on Day 1 of the ongoing Ranji Trophy.

Former champions Uttar Pradesh were riding high as they scored a good total of 300 for the loss of six wickets vs former champions Punjab on Day 1 of Round 5 of the ongoing Ranji Trophy 2016-17, at the Rajiv Gandhi International Stadium in Hyderabad on Saturday. Kuldeep Yadav remained unbeaten on 62, while wicketkeeper-batsman Eklavya Dwivedi also scored a good score of 60. Also, Rinku Singh scored 50, while Umang Sharma also scored a decent 49. As for Punjab, Shubek Gill claimed three wickets, while Sandeep Sharma claimed a couple of wickets, as they look to end the UP innings early on Day 2. Ranji Trophy 2016-17 Points Table & team standings

Kuldeep Yadav (62 not out) and wicketkeeper Eklavya Dwivedi (60) rescued Uttar Pradesh from a shaky 143 for five to take the team to 300 for six at the close of first day’s play against Punjab in a Ranji Trophy Group A match. At stumps, left-arm spinner Saurabh Kumar (39 not out) was giving Kuldeep, known more for his chinaman bowling, company. Opting to bat, UP did not have an ideal start as they lost both their openers – skipper Tanmay Srivastava (0) and Samarth Singh (12) – cheaply, to be struggling at 31 for two. Shubhek Gil (3/52) and Sandeep Sharma (2/68) managed to cause the early damage despite important contributions from Umang Sharma (49) and Rinku Singh (50), reports PTI. FULL Cricket Updates, Ranji Trophy 2016-17, Day 1, Round 5

However, Yadav and Dwivedi played patient and responsible knocks, and in the process pulled the team out of a jittery start by putting on a solid 99-run stand together for the sixth wicket. The duo took UP to a relative safety of 298 for six before Dwivedi got out with a score of 60 that came off 77 balls, including seven boundaries and a six, added PTI. 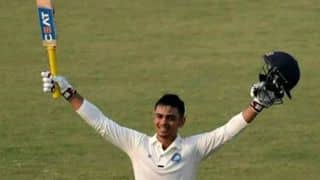