Contribution from Puneet Datey (60) and Harpreet Singh Bhatia (78) allow Madhya Pradesh to set a target of 216 against Delhi in the quarter finals of Ranji Trophy 2017-18.

Contribution from Puneet Datey (60) and Harpreet Singh Bhatia (78) allowed Madhya Pradesh to set a target of 216 against Delhi in the second quarter finals of Ranji Trophy 2017-18. Delhi were able to pick 2 quick wickets on the start of Day 4 and reduced Madhya Pradesh to 53 for 4. Madhya Pradesh were 47 for 2 at stumps on Day 3.

Vikas Sharma has been the most economical bowler for Delhi picking 3 wickets. On the start of Day 4 he dismissed Shubham Sharma who had got off to a good start and later picked the set batsman Puneet Datey and then the highest scorer Harpreet Singh. The match overall has been a good contest between the combative sides. After Madhya Pradesh were 53 for 2 captain Devendra Bundela put up a 100-run stand with Puneet Datey and took score to 153. Soon after Madhya Pradesh lost two wickets in quick succession again and were 153 for 4.

The Madhya Pradesh batsman got out in a pattern on Day 4. The first 2 wickets fell within 3 runs, the next 2 wickets fell on 153 and the No. 8 and No. 9 batsman followed the same pattern on 276 runs. Brilliant bowling performance by Vikas Sharma and Vikas Tokas who shared 7 wickets among them got Madhya Pradesh all out for 283. Delhi, in their second innings, sent Vikas Tokas to open the innings instead of Gautam Gambhir with Kunal Chandela and are 8 for no loss at the end of day 4.

Even if Delhi doesn t win the match, a draw will see them qualify for the semi-final as they secured a first innings lead. 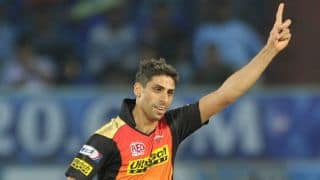 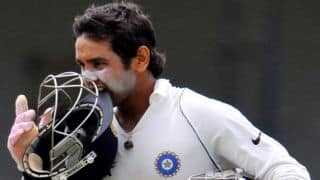