Vidarbha gained control of the Ranji Trophy 2017-18 final against Delhi courtesy Rajneesh Gurbani and Wasim Jaffer. Gurbani produced a scintillating spell of fast bowling that included a hat-trick to bundle Delhi for 295 in the first session of Day Two. Jaffer remained unbeaten on 61 to keep things in Vidarbha’s gasp heading into Day 3. They still trail Delhi by 89 runs.

Fazal reached his 32nd First-Class fifty in style before giving his wicket away for 67. Akash Sudan first cleaned up the cautious Sanjay for 31, and then moved on to claim Fazal. Fazal trying to play the ball past the slip cordon handed a simple catch to Pant.

From here on it was all the Jaffer show. Playing his ninth Ranji Trophy final, Jaffer produced another Jafferesque innings. He was solid as rock and cool as a cucumber in the middle. His stand with Wankhade was crucial in cutting down Vidarbha’s lead.

Jaffer went on to score his 86th First-Class fifty.

It was Kulwant Khejroliya, who ended their march scalping Wankhade for 28. It was Jaffer and Akshay Wakhare (0*), who played out final few overs took Vidarbha to safety on 206 for 4.

Earlier in the day, Delhi were rocked by Gurbani. He claimed his third fifth-wicket haul in three matches to end Delhi innings; finishing with 6 wickets. Delhi needed Dhruv Shorey to stay for long in the first session but he did not have enough support. Gurbani’s hat-trick victims were Vikas Mishra, Navdeep Saini and Dhruv. Siddesh Neral was the other wicket-taker on Day Two for Delhi. 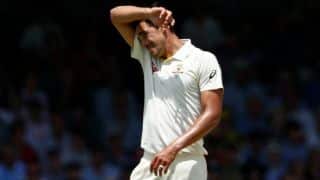 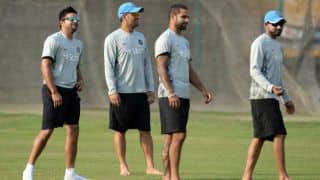