Rajkot was treated to a Jadeja show on Sunday.

Rajkot was treated with a Jadeja show on Sunday. As a result Jammu & Kashmir (J&K) are reeling at the moment. It was not just Ravindra Jadeja, fellow Jadeja, Dharmendrasinh, came to the party. Saurashtra had finished with 428 for 4 on Day One. They continued to pile more miseries on Day Two.

Ravindra, who slammed his eighth First-Class century on Saturday, scored another double-hundred (don t forget this man has three triple-hundreds in First-Class cricket). Earlier in the innings, Sheldon Jackson s hurricane 156-ball 181 boosted hosts run-rate as they have plenty of time to gain six points from this game. Full updates from Day 2

Wicketkeeper Snell Patel missed what could have been his maiden First-Class century by 6 runs. The innings received boost from Dharmendrasinh, who too bats left-handed and bowls left-arm orthodox. Batting at no.9, he slammed a 27-ball 40 not out, an innings that consisted four sixes. Saurashtra declared at 624 for 7.

He wasn t finished. He went on to claim 3 wickets. The senior Jadeja too came into the party, sending back J&K opener Shubham Khajuria, who also is their top-scorer so far. J&K ended the day at 103 for 4 with captain Pervez Rasool at the crease. The visitors from north India have a mountain to climb.

Gujarat managed a 99-run lead on Day 2 against Kerala at Nadiad. Chirag Gandhi looks set for his second First-Class hundred. He finished with 91 not out at stumps. The No. 11 batsman Siddharth Desai has played 10 balls, but Gandhi will need more support on Day Three.

On Day One, Sanju Samson s fifty and Sachin Baby s 49 were the only saving grace for the hosts as they folded up for 208. Gujarat s new recruit Piyush Chawla bagged a five-for while teenage debutant Desai claimed a 3-for with his left-arm orthodox.

Rajasthan were 250 for 4 after Day One. They managed another 173 to eventually fold for 423. Jharkhand s Ashish Kumar and Sunny Gupta took three wickets each. The game hangs in even-steven as Jharkhand were reduced to 15 for 2 before their skipper Saurabh Tiwary blasted an entertaining fifty.

Jharkhand were 97 for 2 at stumps and face a daunting task in order to get a lead. With the likes of Ishank Jaggi and Ishan Kishan to follow, Jharkhand may as well pose a serious threat.

The star of the day was Rajasthan all-rounder Tajinder Singh, who lit up the hosts innings with his maiden First-Class century in only his second game. Earlier, opener Amitkumar Gautam set the platform for Rajasthan with his century. 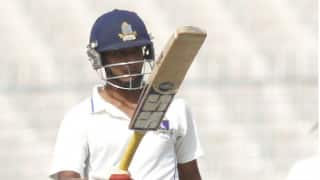