Ashok Dinda took 2 more wickets on the final day of Round 7, taking his tally to 30 wickets at 17.8. He is at No. 4 in the list of most wickets in this season. After setting up a target of 404 for Goa, Dinda removed their openers for 8 runs.

Jharkhand needed Ishan Kishan to bat all day, but he could manage 33 off 59. Ishawar Chaudhary had him caught behind. Gujarat eventually won by 10 wickets.

Abhinav Mukund went for a mere 1. Chasing 232 against Baroda, Tamil Nadu slumped to 130 all-out. Baba Aparijith led the resurgence for a brief period, but his 175-ball 60 could not bail his team out.

Harbhajan Singh took 2 wickets, dismissing the last two batsmen. He bowled at an economy of over 4. Punjab drew with Services, taking 3 points for first-innings lead. Both teams anyway had no chances of qualifying for the next round.

Rishi Dhawan provided late blitz, blasting 53. Given the match was heading towards a draw, his innings came as a source of entertainment.

Jaydev Unadkat could not bag a wicket against Team Rajasthan. Saurashtra had a chance of winning the match as well as qualifying for the quarter-finals, but Team Rajasthan bounced back and scored 394 for 7 in the second innings. Saurashtra perhaps needed better efforts from their captain and pace spearhead Undakat.

Amit Mishra has 4 half-centuries at the international level. He, however, gave his all to take Haryana out of the woods, but his 79-ball 40 at No. 7 could not provided further impetus. Kerala won by an innings and 8 runs. Basil Thampi took 2 wickets.

Mayank Agarwal is the highest run-scorer, becoming the only batsman to cross 1,000 runs in this season. He scored a twin century against Railways. It was his blazing hundred that set up a comprehensive win for Karnataka. 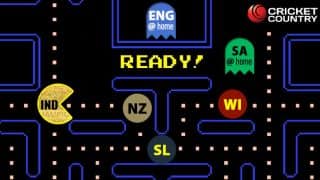