Gaikwad smashed 16 boundaries and one six in his 217-ball 118, eight runs short of going past his highest score of 126.

After suffering a nine-wicket defeat in their previous match against Gujarat, Baroda bagged their first three points owing to a first-innings lead against Maharashtra in their Elite A Round 2 Ranji Trophy 2018-19 match at the Motibaug Cricket Ground in Vadodara on Thursday.

Resuming their second innings at 367/3 on the final day, with a lead of 421 runs, Baroda s Vishnu Solanki, unbeaten on 156, added 19 runs before he was cleaned up Satyajeet Bachhav. Gujarat declared their second dig at 410/5 to set Maharashtra a 464-run target.

In reply, Maharashtra ended the final day at 217/2 with opener Ruturaj Gaikwad unbeaten on a fine 118, his second first-class century. Chirag Khurana (36) and captain Ankit Bawne (40), who were both dismissed by Swapnil Singh, were the only casualties for Maharashtra when stumps were drawn.

Gaikwad smashed 16 boundaries and one six in his 217-ball 118, eight runs short of going past his highest score of 126. 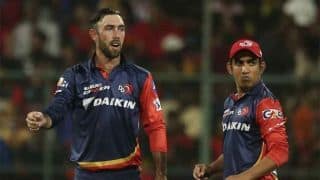