Solanki smashed 16 boundaries and five sixes for his unbeaten 156.

Vishnu Solanki s brilliant 156 coupled with Deepak Hooda s 96 helped Baroda gain a massive 421-run lead on the penultimate day of their Round 2 Elite A Ranji Trophy 2018-19 season match against Maharashtra on Wednesday.

Maharashtra were wrapped up after adding just 15 runs to their overnight score of 253. Satyajeet Bachhav departed for 17 after he was trapped leg before to Atit Sheth. Swapnil Singh, who claimed four wickets on Tuesday and scored 79, added another in Samad Fallah (4), to cap a fine allrounder performance.

In their second dig, Baroda were hesitant in the start and lost opener Aditya Waghmode for seven off Fallah. However, Solanki and captain Kedar Devdhar combined to conjure a 167-run partnership for the second wicket to help Baroda to 189 when Devdhar, who was trapped by Fallah leg before, fell nine runs short of his eighth first-class century.

Solanki, meanwhile, smashed 16 boundaries and five sixes for his unbeaten 156, his third first-class century. He also went past his previous first-class highest score of 116. Solanki received good support from allrounder Deepak Hooda, who struck 10 fours and two hits over the fence for his 109-ball 96, which ended after he was castled by Ashay Palkar. 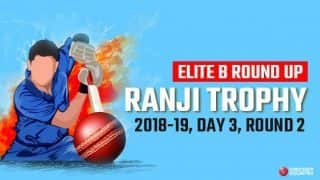