Vidarbha have put themselves in a prime position to secure a first innings lead after a collapse and a slow run-rate saw Baroda crawling to 288/7.

Vidarbha have put themselves in a prime position to secure a first innings lead after a collapse and slow run-rate saw Baroda crawling to 288/7 in 104 overs, still trailing by 241 runs on Day 3 of their Ranji Trophy 2018-19, Elite A, Round 3 match in Nagpur.

Though Aditya Waghmode and Deepak Hooda scored centuries but others offered little to no contribution. The trio of Aditya Sarwate, Askhay Wakhare and Lalit Yadav picked up two wickets each to neutralise the impact of the centuries.

Wakhare provided a perfect start to the morning for Vidarbha when he dismissed Kedar Devdhar (20) with the very first delivery of the day. He would strike again and this time removed Vishnu Solanki (9) to leave Baroda in a spot of bother at 55/2.

However, the pair of Waghmode and Hooda then began the repair work as they stiched a big 185-run partnership for the third wicket. With 14 fours and two sixes, Waghmode scored 103 off 253 before falling to Lalit. Hooda followed him to the dressing room immediately in the next over after his departure. He scored 100 off 169 with 13 fours and two sixes.

The twin dismissals triggered a collapse as Baroda lost five wickets for the addition of just 44 runs. At stumps, wicketkeeper-batsman Pinal Shah was unbeaten on 14 alongside Soaeb Tai (3*). 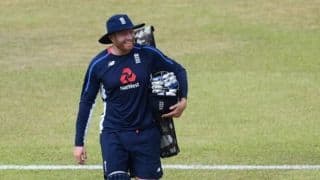