At stumps, Karnataka were 41/0 after Railways were bowled out for 143.

Ronit More s second five-wicket haul in four matches of the 2018-19 Ranji Trophy helped Karnataka move into the ascendancy over Railways in the round seven Elite Group A fixture at Shimoga on Sunday.

Karnataka added five runs to their total to be bowled out for 214 in 91.4 overs, and claimed a lead of 71 with More (5/45) leading the way. Abhimanyu Mithun took an early wicket and M Prasidh two as Railways slipped to 32/3, while More chipped away with a steady flow of wickets. 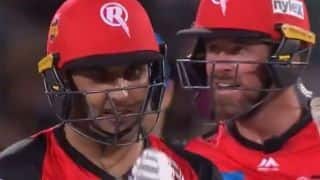